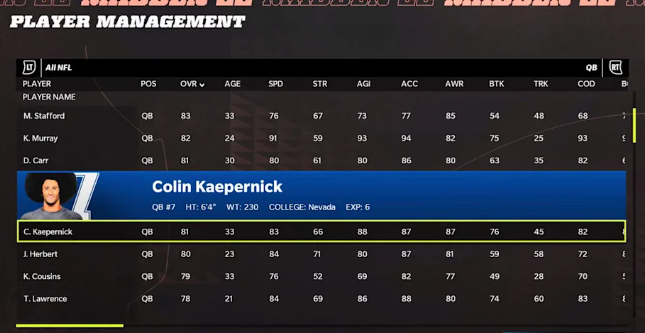 The launch date of Madden 22 aka Madden Day received an extra jolt of media coverage when it was announced that exiled former QB Colin Kaepernick was rated 81 overall.

Despite not playing in an NFL game since 2016, Kaepernick was rated higher than half of the league’s starting quarterbacks.

Kaepernick’s 81 overall Madden 22 rating is even with Derek Carr, one below Kyler Murray (82), and just two behind Matthew Stafford‘s 83.

So what does it mean? As the old saying goes, “The only bad publicity is an obituary.”

I was a guest on CBS Sports Radio and the JRSportBrief show and we talked about Kaepernick, and the Madden Ratings in general. You can listen here.

Like I told JR, I think this was a marketing decision. It maximizes all the earned media, that was going to be good to begin with – but this got even more coverage.

Part of its overall EA Sports Madden marketing rollout compared to year’s past.

For example, the Madden 99 Club (the highest rating a player can get) used to be announced all in one day.

This year for Madden 22, via partnership with ESPN and heavy social media promotion,  they turned it into a week-long event called Ratings Week.

In addition to that, they gradually rolled out new features available in this year’s game.

So, why not drop a bomb like CAP to get a ton of earned media on day of release?

But, doesn’t this undercut the validity, the sanctity, of the ratings moving forward, FOREVER?

If Kaepernick is 81, what will Terry Bradshaw‘s rating be??

OK cool, you want Kaepernick in the game to create a news worthy, buzz headline. Cool, got it.

But if you’re going to do that, why not Larry Fitzgerald, who has not officially retired either?

What would be cooler than to start a franchise with the express purpose of setting the all-time NFL rushing TD record w AP?

Or Frank Gore. 3rd all-time in rushing yards, why can’t he be in the game?

Maybe I want to run a backfield of AP + Gore, and just CHURN to set records?

Ready for a Kaepernick Konspiracy Theory?

He hasn’t played since 2016. And we have not heard much from him recently.

But suddenly, here is the Madden 22 81 overall rating announcement.

Then on the same day, it just happened to coincide with a video release on the NFL Throwbacks YouTube channel featuring Chargers vs. 49ers 2014, Week 16 when CAP scored on a 90 yard run.

I’m not into politics, but the timing is very interesting and got my old bean spinning.

What if Kaepernick’s 81 Madden 22 rating is hinting that he is plotting a comeback to the NFL?

It could damage his brand if he comes back. If he were to come back and tank then its the scouts and coaches were right and the narrative changes. He would not only have to come back but be an elite threat.

But lets talk about someone who IS playing this year – Tom Terrific aka Tom Brady. His Madden evolution has been as impressive as the game itself.

Everything he touches turns to LOMBARDI. And if Kaepernick’s rating is an 81, Tom Brady’s Madden rating should be 99.

This year for Madden 22 is the most they’ve changed from one madden to the next in probably the last decade.

And the announcement of CAP being in the game and outranking half the league is as good as any possibly way to broadcast that.