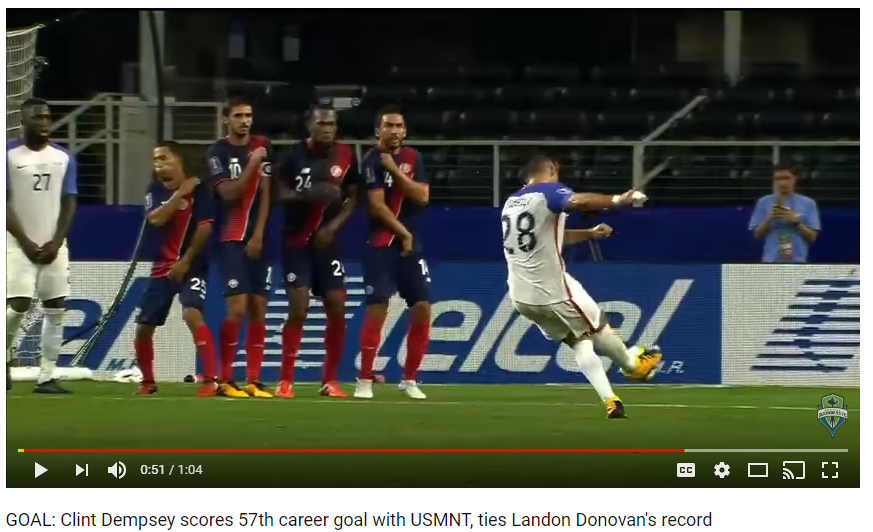 Clint Dempsey is the former captain of the US Men’s National soccer team. The 34-year-old is tied with Landon Donovan for the all-time USMNT goal record with 57 career goals. He is also a trailblazer in terms of Americans playing overseas, particularly in the Premier League, where US players have not gotten much respect.

The $4 million dollars English club team Fulham offered Major League Soccer (MLS) for his services in 2006 was the highest amount ever offered for an MLS player. Dempsey went on to score the most goals in the Premier League in franchise history, including becoming the first American player to score a hat-trick in the English Premier League.

In 2012, he was transferred to Tottenham Hotspur for $6 million dollars and made the highest salaried US soccer player of all-time. Dempsey has scored the fastest goal in World Cup qualifying history (53 seconds) and is one of only two American players (along with Brian McBride) to score goals in multiple World Cup tournaments.

I asked Clint about this career and playing in the World Cup.

Does it feel different to score a goal in a league game compared to the World Cup?

Yes, because of the buildup and it’s such a difficult process to try to qualify for the World Cup. And when you’re there, you don’t know if you’re going to play three games or have the opportunity to play more. And then once you’re there, you advance out of the group, and then when you’re out of the group, then anything can happen and you got to the playoffs so you go farther and farther. You work so hard for four years leading up to three games, and you have to make the most of those three games, so that’s why you feel so much emotion when you do score and know the fans are behind the team, because you’ve waited for this moment for so long and you don’t know if you’ll ever get back again.

Is scoring a goal the hardest thing to do in sports?

At times, it feels like that, but other times, it feels like luck is on your side. It is a great feeling. For me growing up, whether I scored a touchdown or hit a home run, or scored a goal, scoring a goal is the greatest feeling to me. It gave me such a rush you want to keep doing it over and over again. That’s the reason I love the game. I love that it’s continuous, there aren’t that many stoppages, and scoring a goal is why I fell in love with it.

What kind of goal do you prefer: a long distance strike or up close via weaving thru opposing defenders?

The thing I like the most is when you score and it’s an important goal. Whether to tie the game in an important match or to give your team the go-ahead to help your team win. In a close game, and you know you’ve given your team an opportunity to win a big game. Those are the goals that mean the most; to be able to score on big occasions against big teams. It doesn’t matter how they go in, they all feel the same. It’s the best feeling. You feel like you can run through a brick wall.

You were the first American player to score a hat-trick in the English Premier League. Is that your career highlight?

What I look back on with the most pride is scoring my first goal in the World Cup. That’s what I dreamt about for years. At night when I would say my prayers, that’s what I would ask for. So, that’s the thing that stands out in my career. Playing in the World Cup, playing for my country and being able to score in an important game when we needed a goal and accomplishing a dream. Since then, I’ve scored a hundred goals and done other things, but to me that was the most special.

Who was your soccer idol growing up?

Diego Maradona. Watching him play in 1986 World Cup and seeing him being able to lead his country and the way he played and how he could make such an impact… that’s someone I really looked up to.

What’s the biggest difference between fans in the UK and in the US?

Depending on what stadium you’re at, the fans are more in unison, everybody’s on the same page. And that’s something that takes time. The more history you have with the club, the more that everybody knows what’s going on, the theme song, and everybody on the same page. Also, the knowledge of everybody appreciating the game. Definitely the fans are getting more and more aware in the States, there’s more passion for it. We (Seattle) really have the top fans in the States. These are exciting times, because it’s come a long way from when I first started playing with the National Team. Because now when I play home games, I really do feel the home field advantage. And they really do help with your dominance during World Cup qualifying because they really get behind you.