I miss Chuck Cecil like a sailor misses the sea and I’m not afraid to admit it. There just aren’t that many men around on earth anymore as “wussy-itis” has taken over.

Do you think Chuck Cecil ever cared about other people’s opinion of his style of play? Heck no he didn’t, because he was too busy being a man.

Chuck Cecil was too much man for the NFL.

The fact that he ever played a down in college, let alone the NFL speaks to his will and determination. As a six-foot, 150 lbs high school senior, Cecil wasn’t offered a college scholarship anywhere. His coach told him not to take off his shirt during workouts for recruiters so they couldn’t see how skinny he was.

Cecil was drafted in the fourth round of the 1988 NFL Draft by the Green Bay Packers and wasn’t expected to contribute very much, because even then at 6 feet, 185 lbs, he was vastly undersized in a league full of huge humans. After three years primarily coming off of the bench, Cecil’s 1991 season put him on the map. And, scored him some killer in-stores: 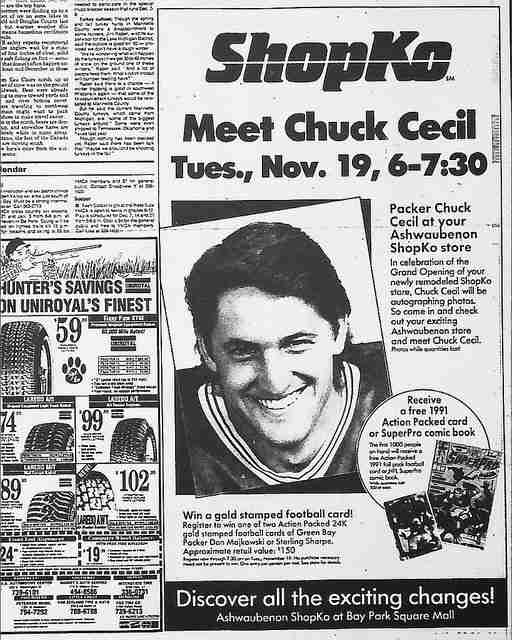 In starting all 16 games he had 110 tackles, three interceptions and a forced fumble. But more than that he made a name for himself with his aggressive, reckless tackling style; if he would’ve been a baseball player around that time, he would’ve been Rob Deer because he either ripped a homer, or struck out, every time.

Due to his hit or miss attempt, and the level of violence that he contributed to every play, he earned the nickname “Scud” Cecil, thanks to the conflict in the Persian Gulf and Saddam’s chosen missile, the “Scud” for all you youngsters.

Cecil followed up his breakout 1991 campaign with the only All-Pro season of his career in 1992. That season he had 102 tackles, four interceptions and a fumble recovery. But his stats, impressive as they were, don’t even begin to tell the entire story. Here’s is Chuck Cecil’s 1992 Topps football card:

He influenced countless plays by fear alone in a way that no current player does; opposing receivers wouldn’t even run routes fully on his side of the field. He was just a complete beast. But the play that summed up Chuck Cecil came the following year.

Playing for the Phoenix Cardinals he unleashed the hit of his career. September 12th, 1993- Cecil’s hit on Washington Redskins tight end Ron Middleton defined the tough, old school era of football that Cecil epitomized and inadvertently ushered in a new softer, gentler NFL.

Cecil hit Middleton so hard on a reception over the middle that it knocked Middleton’s helmet off with both ends of the double chin strap still connected. Not only was Cecil fined $30,000 but the NFL actually banned the video of the hit which just like any controversial album or book, made the hit, and Cecil’s legend, that much more popular. Go ahead and Google it now; you can’t find it. That’s how awesome it was.

The fact that Cecil at 185 pounds could even get Middleton 262, on the ground, let alone pulverize his brain gives you some idea at the force he could fling his body. And he did it over and over to larger men than himself every Sunday.

If you’re looking for one reason as to why the NFL turned into the glorified flag football it has become, blame Chuck Cecil.

Chuck Cecil only played one more year in the NFL due to concussions and a conspiracy about the NFL blackballing him, but a player like Cecil, like any truly great musician or out of control actor, can only survive for so long.