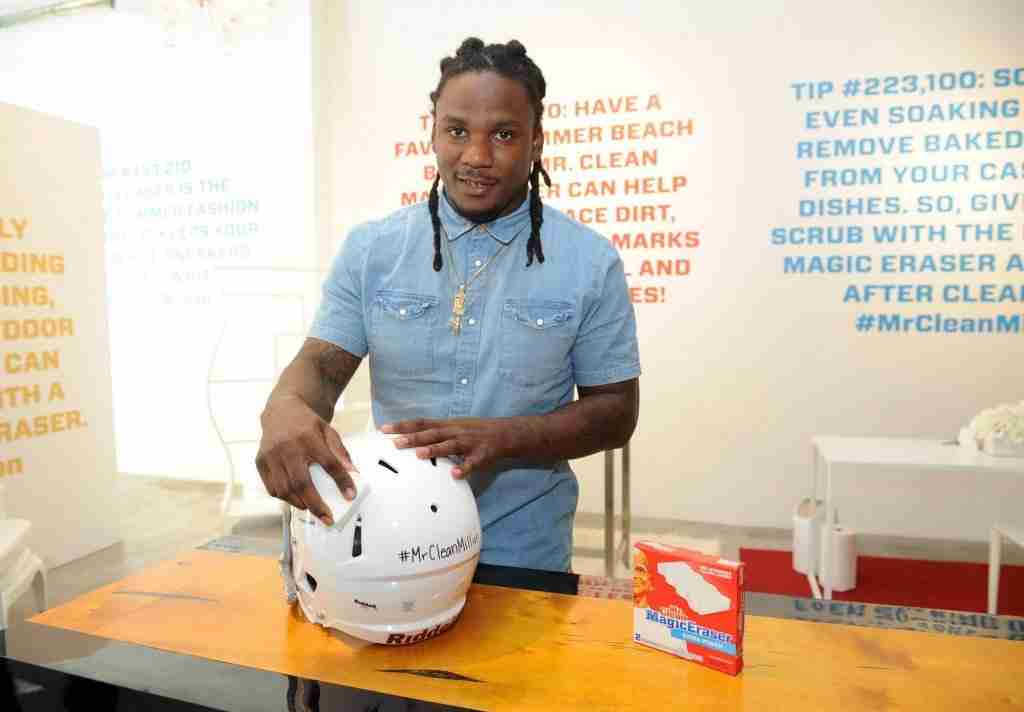 Who knows more about staying clean than running back Chris Johnson? One of the fastest players in NFL history, Johnson knows all about bursting through holes untouched and unsullied by opposing defenders.

Regardless of how his 2014 season turns out, his first in New York as a member of the Jets, Johnson is arguably the most explosive running back in NFL history.

For reasons beyond his control, though, (among them the de-emphasis of the running game league-wide and rule changes to encourage passing) it is easy to forget the impact he has made on the NFL, entering his seventh-year in the league.

Johnson set the single-season record for yards from scrimmage during his 2009 Offensive MVP campaign with 2,509. “CJ2K” is the only player in NFL history with 6 TD runs of over 80 yards – no other player has more than three.

Johnson has a well-earned rep for busting long touchdown runs, but he has also been a consistent workhorse back.

In four of the last five seasons, Johnson has finished in the top five in touches. He has rushed for over 1,000 yards in each of his six seasons,  scored 10+ TDs in four of those and averaged 1,661 yards from scrimmage per season.

We spoke to him about his partnership with Mr. Clean and the “Magic Eraser“, how it feels to run a 4.24 40-yard dash and his monster 2009 season.

CJ2K! How is Mr. Clean doing these days?

Chris Johnson – “He’s pretty good! You gotta keep your whips and your clothes clean, and Mr. Clean is all about that. ”

I made a mistake the other day. I bought these really nice white Polo shoes. Low cut, crisp, the kind you wear without socks, I was looking good. That night, I had an unfortunate incident with a mud puddle on the way home. Guess who was there for me when i needed him the next day?

Chris Johnson – “Mr. Clean. The Magic Eraser does the trick, every time, especially with white clothes. It’s easy to get dirty and the Magic Eraser makes it easy to clean up.”

Coming out of East Carolina, you were drafted by the Titans and the experts were shocked. But since then, you’ve established yourself as one of the most explosive running backs ever. What bridged the gap and took you from being another fast guy who gets drafted, to being a fast guy who has a solid overall game and NFL career?

Chris Johnson – “The situation. I always ran track in the offseason and it gave me the opportunity to work on other stuff that comes natural to football; making people miss, my cuts. So I think that was an advantage I had so I didn’t have to work as hard on my footwork.”

When you came in as a rookie, it was you and LenDale White in the Titans backfield. I used to love the mix of your speed and him as a battering ram. How did his presence impact you?

Chris Johnson – “Coming in with a veteran was huge; he’s still my friend to this day. Having a guy like that, showing you the ropes, is a big deal. A lot of times you come in and you’ve got a guy who’s a first rounder coming in behind a veteran they don’t want to help those guys because its a situation where they don’t want their position getting taken. I went in and he gave me the most help that I needed, how to be a pro. It was a pretty good situation for me.”

It always looked like you were having fun out there. I remember that game you both had against the Chiefs when you took turns blowing them up. What’s one thing that he showed you in hindsight that he showed you that you wouldn’t have known?

Speaking of being a fast guy, what does it feel like to run a 4.25, Chris?

Chris Johnson – “That’s what everybody says and even when I see myself on film it doesn’t look like I’m running fast.”

You’ve got 6 TD runs of over 80 yards in your career; the next closest guys only have three. How do you account for that?

Chris Johnson – “It has to do with everything; vision, speed, once you get pout in the open not getting caught,being able to make people miss. On top of that you;ve got your offensive line and the receivers blocking for you downfield.”

What’s your favorite play; a toss sweep, a trap or what?

Chris Johnson – “Stretch play. Because it gives you a couple different holes to choose from and there’s always a cutback lane.”

Is there a run in your career that is your signature run? A play you look at after and you’re like, “that’s what I’m all about.”

Chris Johnson – “A couple years ago I had a run versus Houston. It was a trap play and I came through the hole. My offensive lineman was trying to get to the block but he wasn’t going to get there so I grabbed him and threw him into the defender and it opened up and I ran.”

Leaving Tennessee, what goals do you have heading into NYC?

Chris Johnson – “Try to win, keep making big plays and doing whatever it takes to win.”

Talk about 2009, the Offensive MVP season. It was the most productive season in NFL history for a running back. What was different about it an dhow does it feel in hindsight?

What has made you a productive dual threat back catching passes where some backs are never able to do that.

Chris Johnson – “It’s different things. As a smaller back, it’s something we have to do, have to be good at. The bigger backs come in and get the tough yardage. I remember a couple years before I came in the league and watched Reggie Bush, it was all about the 225, 230 pound running backs that’s what teams wanted. So for smaller backs, to be starters and be productive We had to do everything and do things those guys couldn’t do. Like being able to run the ball inside and catch the ball out of the backfield.”

You’ve taken a lot of touches in the last five years. The day after a game and at the end of the season, is it like a boxer the day after a fight where he feels beat up?

Chris Johnson – “Of course. You’ve got to take care of your body and continue to work, do those things and you’ll be alright. After a couple games go by, you get in shape and you get used to it. Then the adrenaline on top of that.”