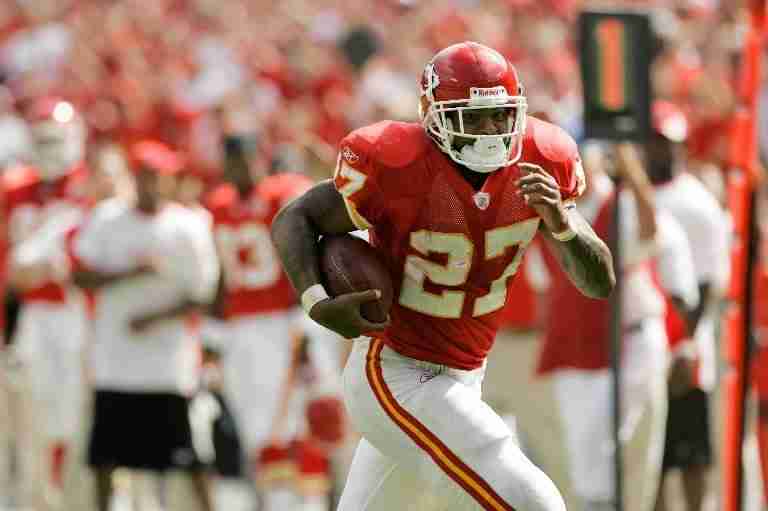 Larry Johnson, can I trust you as my bellcow fantasy running back again?

We’ve all been there; scorned by a fantasy player we’ve once owned in the past, you are now on the clock, your pulse is racing and you are in need.

You told yourself you wouldn’t do this but upon scanning the available selections nothing particularly jumps out at you. And then, you make eye contact across the bar. You try to look away.

“Get a grip man. You’ve gone thru this a thousand times in your mind.”

Thoughts now racing, the seduction is deep, you briefly familiarize yourself with the idea of a partnership.

“I guess I could try it again. Look at his three year average,” you think to yourself,
no one around to stop you.

“Maybe there were a few things I could’ve done better too.”

Everything in your being screams “Don’t draft him” but the apparent value compared to other players on the board cannot be ignored; you do it and you think less of yourself almost immediately.

You came to this draft as a discerning adult, but you leave as something less.

You are a Draft Whore.

And no one is taking you home to meet “Mommy” any time soon. Not dressed like that they aren’t.

Am I going to sell out for Larry Johnson in 2009, you ask? Even though I was burned by him last year, I’m still not against the thought of it because the potential value is too good to ignore.

Here are some positives heading into 2009:

– No one is challenging him for the starting gig.
– King Carl and Herm Edwards are gone. No player suffered more adverse affects
due to their reign.
– Todd Haley is an offensive minded coach who wants to score points.
– He can contribute in the receiving game
– The Chiefs offensive line had another year to gel.
– The Chiefs now have a solid quarterback and a couple veteran receivers,
something LJ hasn’t had since Vermeil Era, meaning defenses can’t sell out to
stop him.
– He is the goal line back.

Of all the running backs in this year’s draft LJ is the hardest one to gauge.

Ever since his eye popping 2006 season he has failed to meet expectations, but has given fantasy owners just enough reason to not give up entirely.

At least part of it is because of the monster year he had in ‘06, even compared to Madden numbers.

Talk about no pitcher ever winning 300 games again, how about no RB ever carries the rock that much again, thanks to the growing trend of running back by committee?

LJ also had 41 receptions for 410 and two TD which basically means he could be the Bears #3 wide receiver today!

457 touches in a single season, which breaks down to almost 29 a game; insane by today’s standards.

But maybe the critics who said that much wear and tear in a single season were right.

In two years since 2006 he has rushed for only 1,433 yards and scored just nine TD, only playing half of 2007 due to a foot injury and missing four games in 2008 due to discipline issues.

In a lot of ways LJ’s career path is similar to former fantasy stud Shaun Alexander.

Shaun Alexander turned 30 in 2007 and that was essentially his last productive NFL season.

Larry Johnson turns 30 in November of this year and missed eight games due to a foot/ankle injury in 2007.

Those are some pretty scary numbers/issues for fantasy owners to consider, but one thing LJ has that Shaun A didn’t is much less wear and tear.

Alexander carried it 336 times in his first two years, and was off to the races.

Johnson carried the ball only 140 times in his first two seasons because Priest Holmes was still a beast. And the Chiefs had a deep backfield, so deep even Derrick Blaylock scored a big free agent deal because of it.

But this isn’t a Larry Johnson vs. Shaun Alexander article; this is about you and your feelings of remorse for drafting LJ in either of the last two seasons.

I know how you feel, I was duped last year and the pain was deep.

But if you can get him in the fourth round, I would say consider it. There is a ton of upside, and also a ton of depth at RB later in the draft.

If you “reconnect” with LJ, make sure you use protection and draft additional RB’s in promising situations later in the draft.

You’re’ on your own now, but I feel like this was a good talk. You’ll make the right decision. I have faith in you. Now, go put on something that doesn’t make you look easy.

Read these as your heart rate settles back to normal: