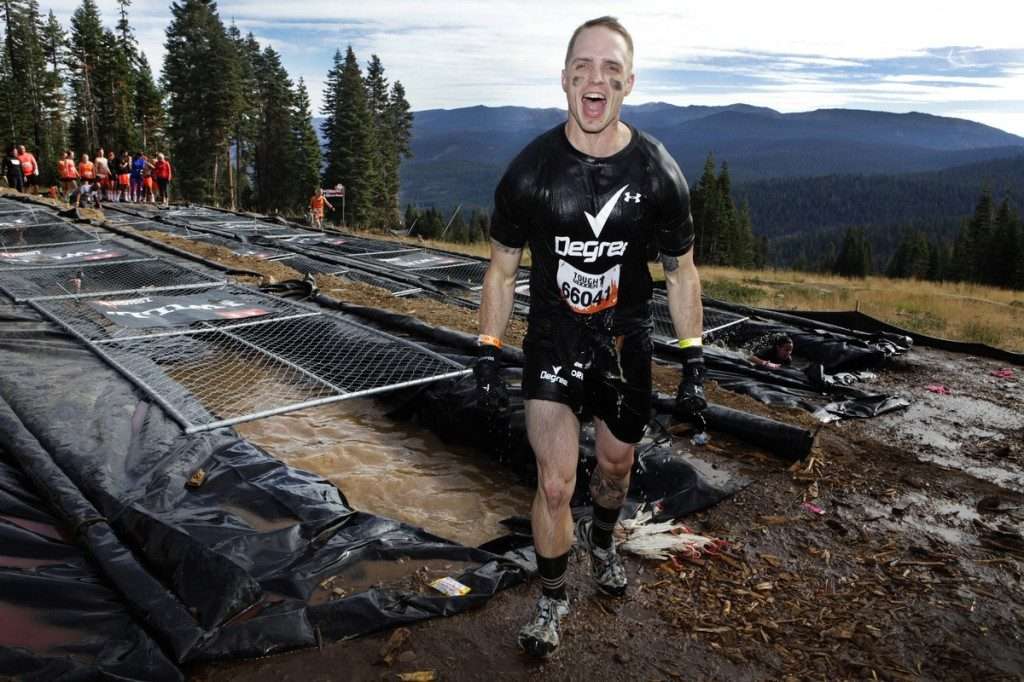 There is no feeling on earth like sliding into the $125 robe in your room at the Ritz Carlton after spending six hours on the most difficult obstacle course in the world. Wait a minute, did someone say “Carlton”?  I thought they did. 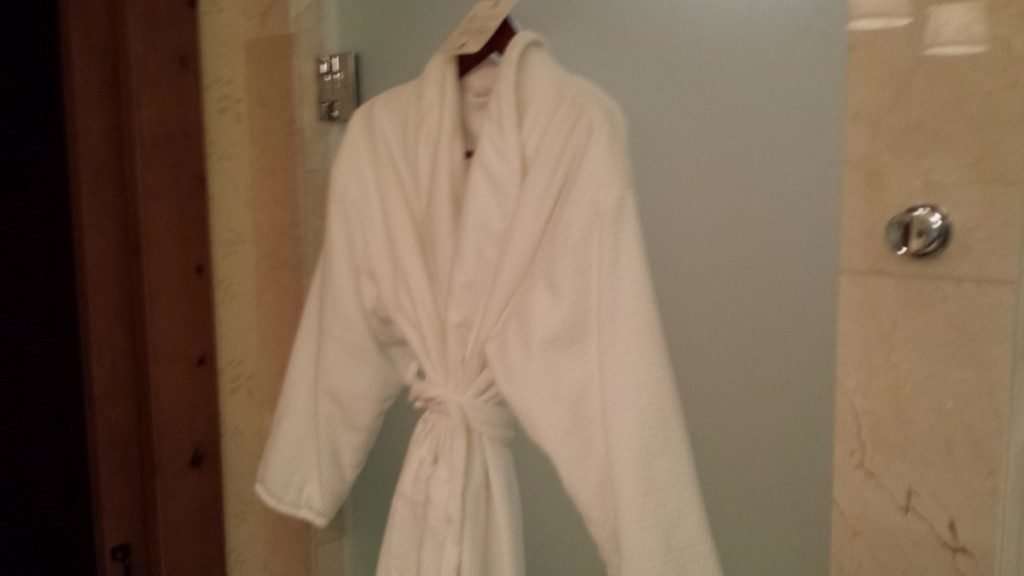 This robe is the kind of robe Carlton would’ve rocked when he was on “Silver Spoons” with Ricky Schroeder. God, how I yearned to ride on that sweet in-house train, even just to go get the mail. Imagine me and the robe and the train. We’d run a train on the train; me, Carlton, the robe, Ricky… good times.

Sure, I thought about stealing the robe. Who wouldn’t? But the minute I stepped foot off the premises, the magic would’ve been gone, like when a young Moonlight Graham steps over the foul line in “Field of Dreams” to be irrevocable transformed into Doc, the kindly doctor who removes a piece of hot dog from Kevin Costner’s daughter’s airway to save her life.

Anyway, I left the robe, and about a pound of ball skin, on the mountain that day, and lived to tell the tale. 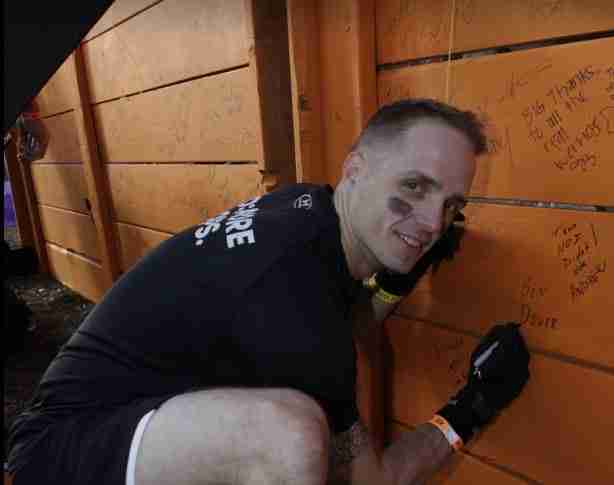 But you know what I didn’t leave on the mountain that day, friends? Sweat, or a stench of any kind. That’s because Degree had my back, not unlike the way Chuck Norris had Jonathan Brandis’ back in the movie “Sidekicks.”

Degree allows you to DO: MORE with three levels of protection.

Degree Men Dry Protection is strong and protects against wetness through the toughest of days. In relation to the Northstar Mountain Resort where the Mudder was held, think of it as the bunny slope; a bunny that can deadlift 805 pounds and is a straight-up carnivore.

Degree Men Adrenaline Series is stronger and built with MotionSense Technology. MotionSense detects the slightest movement and releases extra protection. Micro-capsules sit on the surface of the skin, and upon movement, the capsules break and release bursts of freshness. This is the double diamond slope, prime territory for attracting a few snow babes.

But Degree, like Tough Mudder, doesn’t stop there. The strongest Degree Men product on the market today is The Clinical Series with Re-Charge technology. It provides THREE TIMES the protection of the FDA minimum and beats the shit out of EVERY other deodorant on the market. This is the well-endowed, double black skull slope.

So, what is a Tough Mudder? A 10-mile obstacle course that consists of 20 separate obstacles, the entirety of which was devised to test mental, as well as physical, strength. Adding to the man-made obstacles on the course was the temperature (30 degrees at 9 AM) and the elevation of Northstar Mountain, which has a base elevation of 6,330 and top elevation of 8,610 feet above sea level. 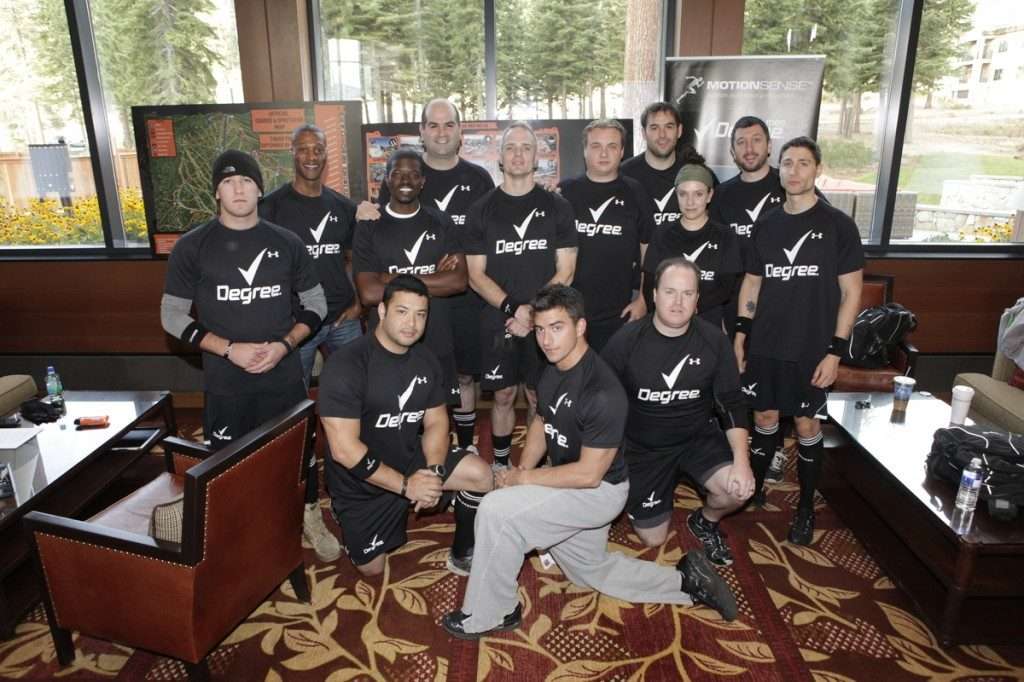 The obstacles play on common fears like fire, water, electricity, heights, marriage, commitment, being naked in front of your high school assembly, etc. 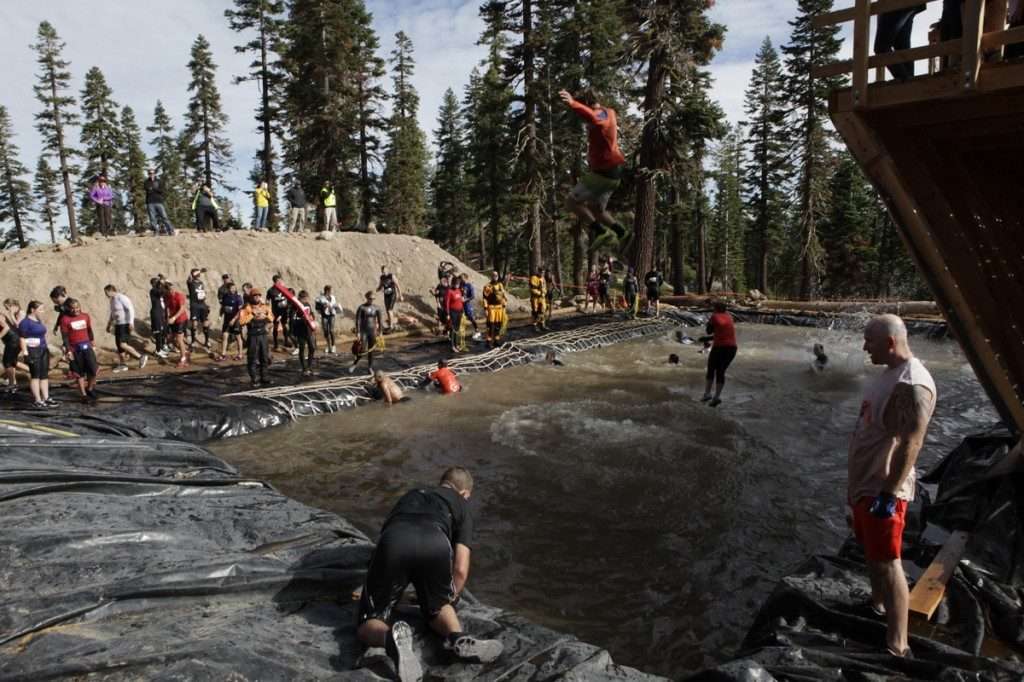 It didn’t take long for me to encounter fear. The second obstacle, Cage Crawl, seemed innocuous and even easy prior to engaging in it. The concept was simple: with your head cocked back and upwards facing the sky, you insert (lol) yourself in a mini tunnel (double lol), with water up to your neck, and pull yourself along using the chainlink fence that serves as a makeshift ceiling.

Your feet couldn’t touch the bottom, and the freezing water enveloped you, rather than you entering the water; it literally took my breath away it was so cold. There was a brief moment of, “What the FUCK, dude? Is this shit safe?”

The picture at the top of this article was the exact minute I completed the obstacle. 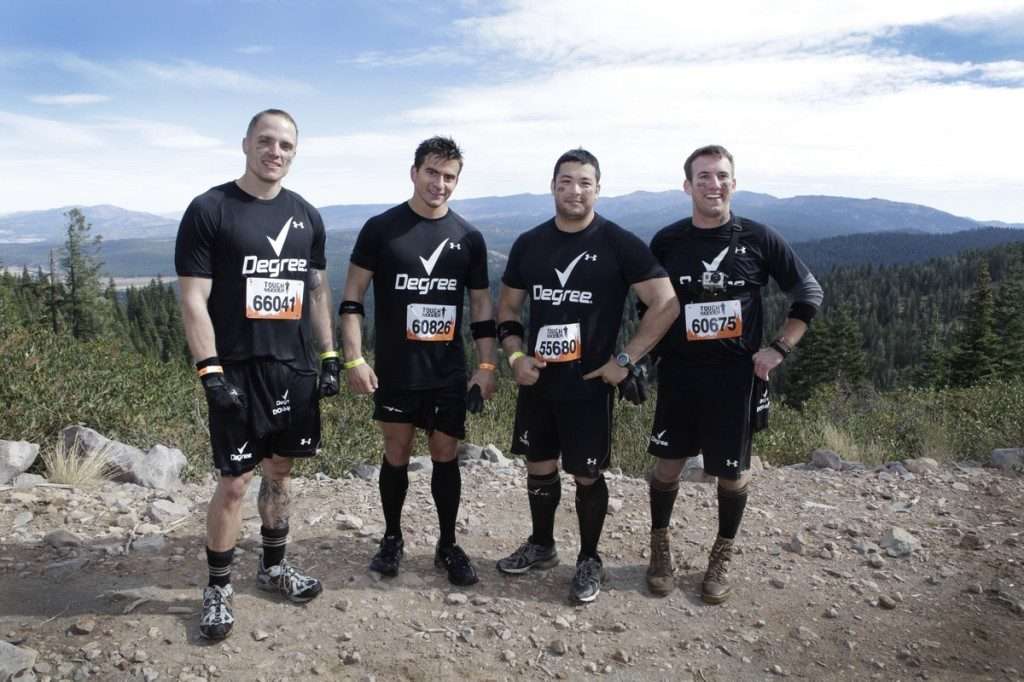 Kiss of Mud should’ve been renamed Rock on Balls because as you army-crawled your way under barbed wire, it seemed with every leg pump that your sac scraped on a protruding rock that was never anywhere else but directly in line and then under your bulge. This obstacle was actually in the course twice, for maximum ball bursting action.

Another obstacle that was a direct assault on my ball sac was the Berlin Walls (or, Berlin Balls). But when I made it to the top of the wall, I was so relieved and completely drained, I didn’t even consider my balls when I straddled the wall and crushed them. I could feel them in my stomach for the next three obstacles. 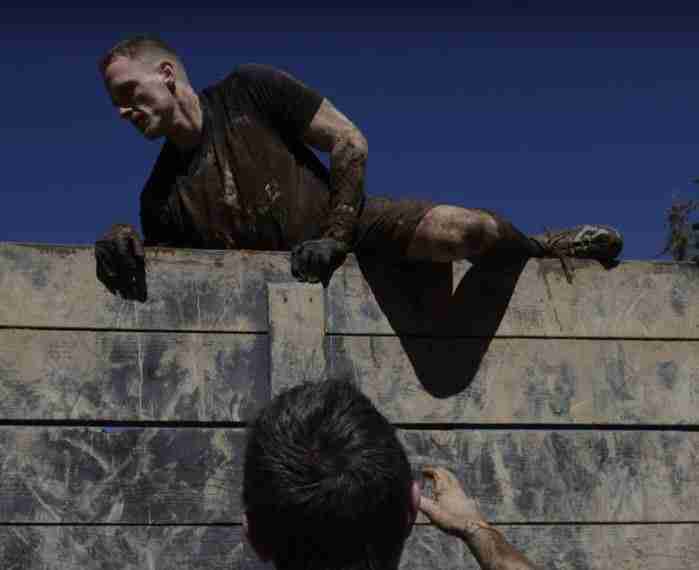 My number one concern prior to the course was chaffing, a fact I was very outspoken about in our pre-Mudder debriefing. Here’s where I voiced my concerns about ball chaffing to a room full of strangers:

One of the final obstacles was called the Arctic Enema and filled a lot of my fellow Mudders with a sense of deep foreboding throughout the day. The worst one for me was the Electric Eel. 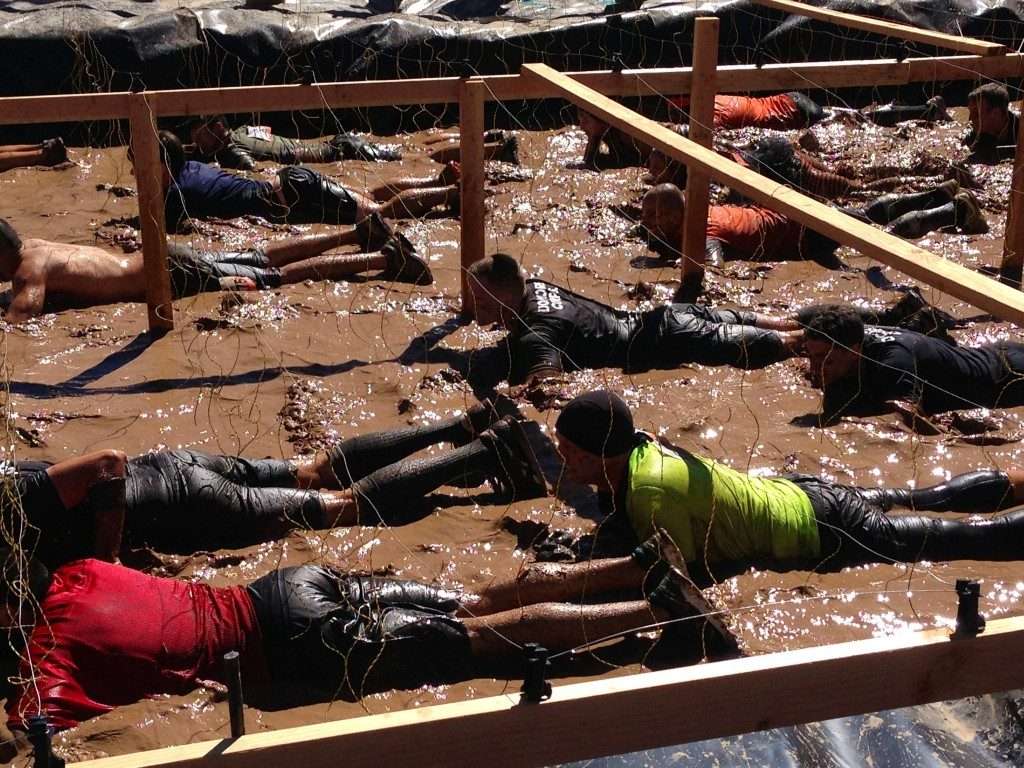 The concept is simple: you army crawl in some shallow water with barbed wire a few inches over your head. Attached to the barbed wire, and dangling in your path, are wires CHARGED with 10,000 volts of electricity. I didn’t know what 10,000 volts felt like; I assumed it would be nothing. But I was seriously fucking mistaken.

I made it about a quarter of the way though and my right shoulder got nipped by an electrode and it flattened my entire body out immediately. I let out some weird, primal, wounded animal scream; it just CAME out of me, I didn’t consciously scream. Or it would’ve been way more masculine, like Sly Stallone when he had to cauterize his own wound with fire in “Rambo III.”

At that moment, everything seemed surreal. I looked around and there were roughly 50 adults undertaking the obstacle along with me, slithering around, screaming, making weird sounds. It was exactly like Episode One, Season Three of “Breaking Bad” when “The Cousins” emerge on the scene and crawl down the desert road.

By the end of the day, I was so bruised, tired and covered in strange fluids that I felt like Corey Feldman after the wrap party for “Meatballs 4.” I also felt fantastic and shot this video in the aftermath:

I took a shower immediately after I got back to my room. There was so much mud, it clogged the drain. I had to wash my hair three times, for reals, playa.

Then, I slithered into the robe that started it all and considered handling all my business for the duration of the weekend from the robe.

I threw my shoes away, but kept the uniform Degree was nice enough to hook us up with. Here is how it looked after a plane ride from California to Nebraska: 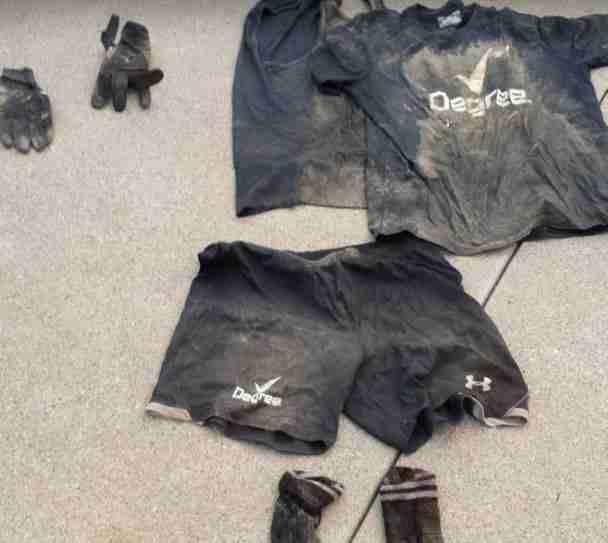 Someone in Lake Tahoe at the Ritz, right now, is sitting in my robe. And it’s reasonable to assume they aren’t fantasizing about the train from “Silver Spoons” like I am now, sans robe.

Many thanks to Brian Gabriel and Jason Heilweil from Degree for making everything happen.

Also, as special shout out to my fellow Tough Mudders who made it a great weekend: Max Miller and Gary Dudak from Mandatory.com, Joe Kinsey and Matt McCormick from BustedCoverage.com, Ned Swain and Amanda Gabriele from COED.com, and JR from JRSportBrief.com.

Terry Crews Told Me About The Time He Got Knocked Out...

Meet me at FolkHouse – Music Review