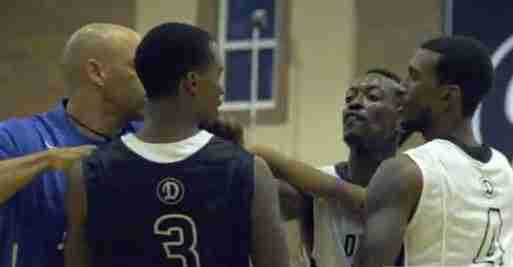 Brandon Jennings elicited a lot of hate from NBA fans during his years in the league.

One former NBA player lived out the fantasy of many a Bucks/Pistons/Clippers fan.

In the middle of a semifinal game of the renown Drew League in Los Angeles in 2013, former LA Clippers player Mike Taylor got into a verbal altercation with Jennings.

After Taylor made a layup in the vicinity of Jennings, he stared down Jennings as he back-peddled down the floor and made his hand into the shape of a gun, while simulating applying a clip into the gun with his other hand. Jennings took exception and got into his face.

After a couple players got in between the players, Taylor smacked Jennings in the face with an open hand. Check out the video.

Taylor was kicked out of the game and Jennings’ squad eventually lost.

Why does everyone hate Brandon Jennings? The purists don’t like him because he’s a point guard who never met a shot he didn’t like, a straight up gunner in the vein of Allen Iverson. Sure he shoots a lot, and doesn’t have a great shooting percentage (.394% for his career) but he is an energy player that changes the flow of a game.

Jennings needs his shots to get going, but he has shown that he has the skills to go off. For what it’s worth, he averaged a career high 6.5 apg last season for a Bucks team that lacked talent.

I still remember when he went off for 55 during his rookie season, displaying every facet of his game:

He will have a chance to punish the Bucks, a common Central Division foe, now that he has setup shop in Detroit with the Pistons.

Why do YOU hate Brandon Jennings – does he shoot too much?