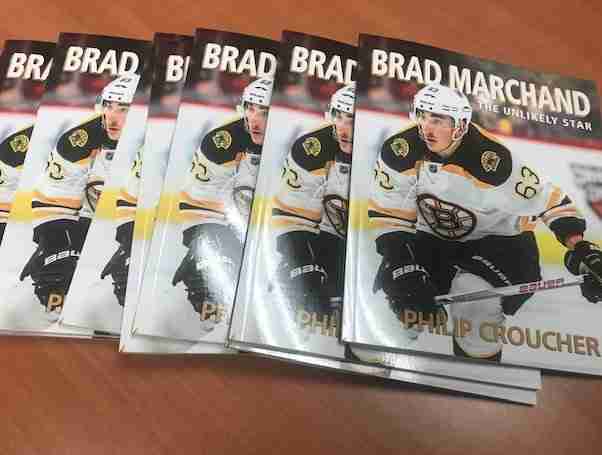 At my best, I am a novice NHL fan. At my worst, I am a complete boob, as many of the articles I have written on this site will attest.

But I love sports and am always up to learn about stuff I don’t know that doesn’t suck.

Brad Marchand doesn’t suck. I asked my hockey brother Hollund Shaf for a quick synopsis about who “the little ball of hate” is with the following simple text:

His response is what I’ve come to understand as BM’s legacy:

“Hate but would love on my team.”

Even if you don’t know hockey, as a sports fan you understand what that description means.

And just in reading it, you probably ran a mental scan of a million memories of a million athletes that fit that description. For some reason, Lenny Dykstra and Ron Artest immediately came to mind. Hollund later said A.J. Pierzynski. And Brad Marchand made sense to me.

The weirdness factor of that alone got my attention. And in a way, epitomizes his career.

Brad Marchand: The Unlikely Star tells the story of one of the NHL’s more animated players and his mercurial rise to fame and infamy as the beloved terror of Boston’s hometown team.

Written by bestselling author and sports writer Philip Croucher, the book provides an in-depth look at how a legend begins, and what it takes to play with the greats.

At just 5′ 9″ Marchand plays left wing for the Boston Bruins. Which is a feat in and of itself. Labeled a “pest,” he was told he was too small to play in the NHL.

Born in Halifax, Nova Scotia, he was overlooked as a young stud thanks to local guys Sidney Crosby and Nathan MacKinnon.

Crosby is 9 months older, they lived across town from each other, and ran in different circles. He was the “can’t miss” stud. Marchand was a tweener at best. He was kicked out of junior hockey for being a jerk.

Just a few years later, he’d lead the Boston Bruins to a victory in the Stanley Cup in 2011; the first in 39 years for the franchise.

In the decade since joining the Bruins, Marchand has helped lead the Boston Bruins to their first Stanley Cup in thirty-nine years.

He scored the winning goal for Canada in the 2016 World Cup final. Marchand’s shorthanded goal with 43.1 seconds remaining completed a stunning comeback for Canada and made Marchand―a player fans loved to hate―a hero.

He regularly makes headlines with his “dirty play” antics on the ice – and that doesn’t include the licking.

Playing with an intensity that delights Bruins fans and a flagrant disregard for authority that incites his critics, Marchand has managed to remain a key figure on the ice both and home and away.

The Brand Marchand book Unlikely Star features personal interviews with “The Little Ball of Hate,” who has matured since his days with the Halifax Mooseheads, as well as interviews with family and coaches, and over 40 photos of the star, including some previously unpublished.