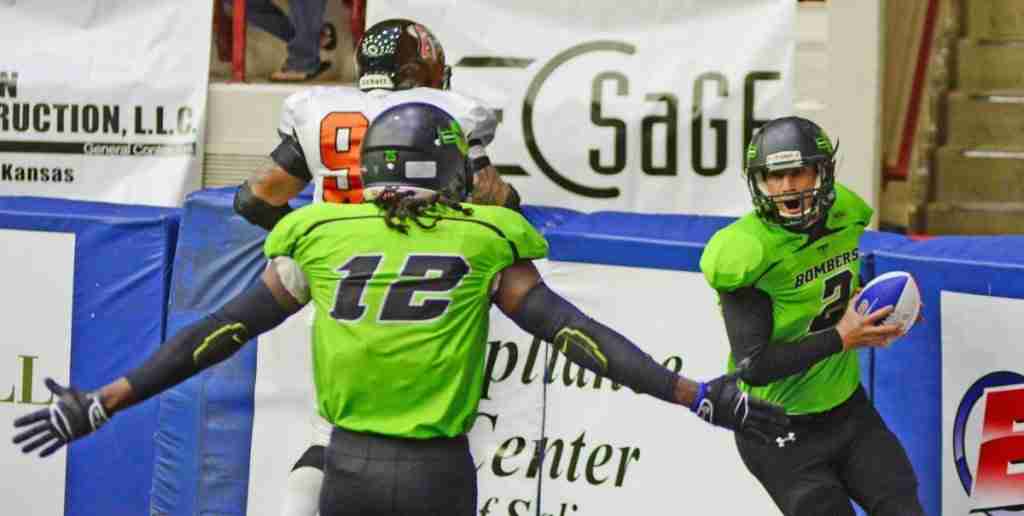 Bombers’ quarterback Chris Coffin started out hot and never cooled, leading his team to a 49-7 victory over the Beef at Bicentennial Arena in Salina, Kansas.

The early season MVP favorite and former Beef quarterback remained hot against Omaha, after garnering CIF Player of the Week honors for his performance at The Slaughterhouse two weeks ago.

What Coffin started, the Bombers defense finished. After giving up 33 points in their first meeting, the Bombers adjusted their defensive strategy. They shutdown the Beef running game early, forced the offensive into predicable passing situations, and blitzed unceasingly for the rest of the game.

Coffin completed 15 of 29 passes for 252 yards for five touchdowns and rushed for another as the Bombers took command of the game immediately.

Salina scored on the first drive of the game and never looked back. The Bombers would build the lead to 19-0 before Omaha scored their first and only touchdown at the 10:29 mark of the second quarter.

A 13-yard touchdown run by Coffin started the scoring, and a failed extra point attempt gave the Bombers a 6-0 lead.

After a short completion by Beef quarterback Chuck Wright to Brandon Kinnie, Wright’s next pass attempt was intercepted in the Salina endzone by DeWayne Autrey.

The Beef defense held the Bombers to a three and out, blocked the ensuing 57-yard field goal attempt, and successfully recovered the ball at the Salina 8-yard line.

The drive started out with a 6-yard run by Travis Ribbing, who powered the ball down to the Salina 2. But after a 4-yard loss on a rushing attempt, and an incomplete pass to Kinnie, the drive stalled and culminated in a 21-yard missed field goal.

Salina took advantage immediately, scoring two plays later on a 45-yard hookup from Coffin to wide receiver Jared Elmore, giving the Bombers a 13-0 lead with 6:46 remaining in the first quarter.

The Beef offense took possession at their own 16-yard line and responded with their second best drive of the game, a seven-play effort that ended on the Salina 15-yard line via failed fourth down conversion.

But just five plays later, Coffin found running back Jeff Mack for a 4-yard score, pushing the Salina lead to 19-0.

At that point, the Beef made a switch at the quarterback position that immediately paid dividends. Tyrell Houghton, a rookie out of Elizabeth City State who signed with the Beef earlier in the week, led a four-play drive, that was capped off by his own 5-yard TD run, cutting the score to 19-7 Bombers.

The ensuing Beef kickoff went out of bounds and gave the Bombers possession at the Omaha 23-yard line, which QB Coffin promptly converted into a 21-yard touchdown pass to former Beef wide receiver O.J. Simpson, upping the Bombers lead to 26-7.

After a Houghton pass was picked of by Isiah Barfield, Coffin connected with Elmore again for a touchdown, this time for 5-yards, that pushed the Salina lead to 33-7 with 4:57 remaining in the half.

A failed Omaha drive gave way to an eventual 2nd-and-goal for the Bombers from the Omaha 13-yard line, where a Coffin pass was intercepted in the endzone by Beef defender James Patterson.

The glory was short-lived, as Beef quarterback Houghton was sacked in the endzone for a safety three plays later, making the score 35-7 as the teams entered halftime.

The final touchdown of the game was an 11-yard pass from Coffin to Jeff Mack, his second of the game, with 7:12 remaining.

It was the second victory over Omaha in 14 days for the Bombers, who improved to 4-1, while the Beef fell to 0-4.

Next week, The Beef travel to Wichita to face the Force on Friday, April 3rd at 7 p.m.

– Houghton’s rushing TD was the lone bright spot in an otherwise rough outing for Beef quarterbacks, as they completed just 12 of 26 passes for 50 yards with two interceptions.

– In two games versus the Bombers, the Beef committed 7 turnovers while forcing a single interception.

– The Beef rushed for 72 yards, most coming in the first half.