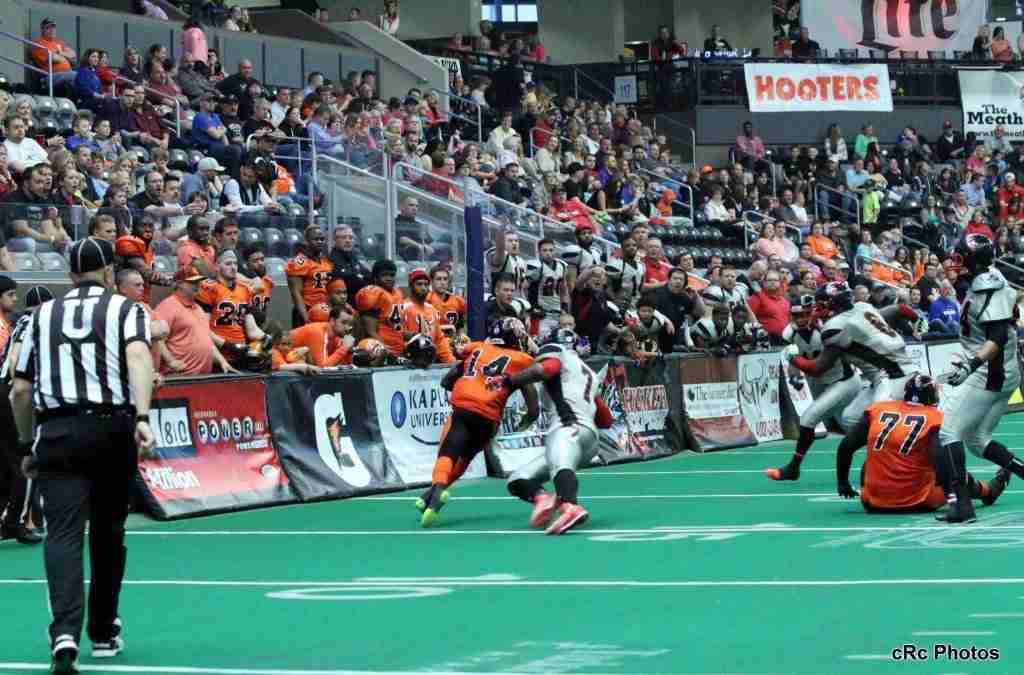 Two weeks ago, the Beef beat the Bandits in the Slaughterhouse 43-41 on the final play of a game that featured six passing touchdowns, one interception, and a combined quarterback statline of 29-of-50 for 316 yards. This game, conversely, was a physical game decided on the ground and via explosive plays on defense and special teams, of which Sioux City had more, en route to a 61-37 victory.

The two quarterbacks, Sioux City’s Charles Dowdell and Omaha’s Tyrell Houghton, combined for a statline of 13-of-33 for 105 yards, two touchdowns and four interceptions. But, Houghton also contributed with his legs.

His 122 yards rushing was the highest total in the league this season – until that mark was bested by Amarillo Venom running back Martee Tenner’s 130-yard effort the following night.

Houghton’s five-yard rushing touchdown gave the Beef a 14-3 lead at the end of the first quarter.

After the Bandits capped off a five-play, 35-yard drive with a two-yard rushing touchdown to narrow the Beef lead to 14-10, Bandits’ defensive back Jonathan Smith intercepted a deflected pass – that was reminiscent of Antonio Freeman’s famous catch – and returned it for an 18-yard score to give Sioux City its first lead of the game 17-14.

Allen Daniels responded for the Beef with a 12-yard touchdown run, his second of the game, as the Beef reclaimed the lead 20-17. But things started to get weird immediately after that.

Kicker Todd Adolf’s extra point attempt was blocked and picked up by Bandits’ defensive tackle Marcus Miles at about the 10-yard line. The 6-4, 265 pound lineman rumbled the remaining 40 yards and was tackled just inside the endzone, giving the Bandits two points and pulling to within one point of the Beef 20-19.

After Todd Adolf converted a 28-yard field goal to extend the lead to four points, Bandits’ quarterback Dowdell threw his best pass of the game. With the ball spotted on the Beef 18-yard line with one second left in the half, Dowdell unleashed a laser that connected with running back Fredrick Bruno in the corner of the endzone for a score, and a 26-23 halftime lead.

The Bandits retained possession to start the second half and ended the eight-play, 48-yard drive with a touchdown to increase the lead to 33-23.

After a failed Omaha drive, Beef defensive back Antonio Bell picked off a Dowdell pass – one of Bell’s two INT’s in the game – and returned it for a 20-yard touchdown, pulling Omaha to within 33-30.

The lone Beef offensive score of the second half came via a 12-yard touchdown pass to Brian Boro with 6:02 remaining in the game. The Beef have a bye this upcoming week, then travel to Salina to face the Bombers on May 9th.

– QB Houghton’s 8.0 ypc average leads the CIF. His six rushing touchdowns is fifth in the league.

– Allen Daniels scored two rushing touchdowns and accounted for 78 all-purpose yards. His average of 124.5 yards per game is third in the CIF.

– Jesse Robertson Jr. added 17 tackles onto his season total, giving him a league-leading 88 on the season.

– Defensive back Marquis Rolle had 10 tackles and two passes broken up.

– Antonio Bell leads the Beef with four interceptions, the fourth-most in the CIF.