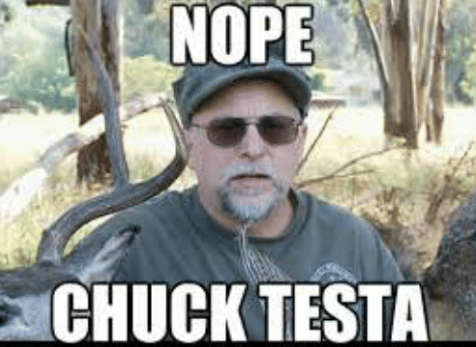 To us, no beer pitchman was ever as cool as Keith Stone, patron saint of Keystone Light and role model to many. “Always smooth,” Mr. Stone was never harried in his approach to the ladies, and always had an answer for everything, predicated on smoothness, just like Keystone Light.

How could you not love Keith Stone’s “Smooth Musings?” It still makes me long for the taste of a cool, freshly-cracked, crisp, spot-hitting, proprietary blend of awesome that Mr. Stone has been peddling for years, right now, here in the office.

This winter, Keystone Light has come up with the coolest reason to slam light beer that you’ve never thought of – The Hunt for the Great White Stone. Here’s how it works:

You buy an orange 30-pack of Keystone Light. Each one contains three styles of cans:

After you bag a Great White Stone, you can artfully mix your orange hunting cans and cans with white antlers to create your own legendary mount that even Keith Stone would be proud of.

Check out this NASCAR themed mount we created with nothing but left horns. We call it, “NASCAN.”

Once your mount is created, head over to the Keystone Light Facebook page and share an image, and the page administrator may hook you up with a special surprise.

And who knows more about creating a mount than YouTube’s favorite taxidermist, Chuck Testa? Chuck specializes in creating “the most lifelike dead animals around, period.” Testa first rose to Internet stardom after a commercial about his business, Ojai Valley Taxidermy (and one of the best YouTube uploads ever), went viral in 2011.

“Before money was involved, they were just like anybody else. Who cares?” Testa said about his relationship with the #1 beer consumed by the most badasses on the planet. “No, I’m just kidding. Keystone Light is a real popular beer and a lot of my clients drink it.”

So, how did he get into taxidermy?

“Well, you gotta pay attention, son. I bought a do-it-yourself kit out of the back of a Field and Stream advertisement in 1982 – for real. It said, ‘Mount pheasants with professional results: $9.95.’ So I did, and they sent me this kit.”

To say his success happened overnight is like saying Yoko made the Beatles a better band.

“Yeah, it was headspinning, it was almost overnight, except that it took 30 years of time. For $9.95 and 30 years of time, you too can be, uh, me. If it went any slower, I’d have been going backwards. Thirty years later, it all worked out.”

What is the key to making the “most life-like dead animals” of anyone?

“Seriously, there is an art to it,” Testa said. “I learned how to mount an animal from the inside out, muscle by muscle, instead of like most guys, who mount them from the outside in, if that makes any sense to you. They’re looking at pictures, right? And they’re trying to make a deer look like a deer based off a picture, instead of knowing how it works on the inside.”

That is a reallllll smoooooth description that you could use on the ladies, too, Chuck.

“Ha, what I get most from the ladies is, ‘Man, Chuck, you’re shorter in person.'”

Between going viral and working with Keystone Light, what’s the one takeaway?

“The insanity of it all. I don’t mean insanity like insanity, but I mean, just how funny life is. Like if you wrote a script of your life, right? And you tried to make a prediction. Tell me six years ago that I would be an Internet meme and make a beer commercial, I’d say, ‘Absolutely impossible.’ How could that even be, you know?”

“I call it a ‘Godshot.’ It happened because of willingness. I was willing to do stuff and I didn’t really have an expectation. I didn’t do anything with the expectation of some type of payoff. I just did it; you can do stuff for fun, just to do it, you know? It doesn’t have to be a big payoff at the end.

“I’ve had a really satisfying, full career. I mean, I guess there could always be more monetarily, but that’s not how I gauge success.”

How do you gauge success? Keystone Light has made it easy for you. Just bag a Stone, build your mount and post your image on the Keystone Light Facebook page.

Watch Me Recite My Favorite Nelly Line TO Nelly At The...