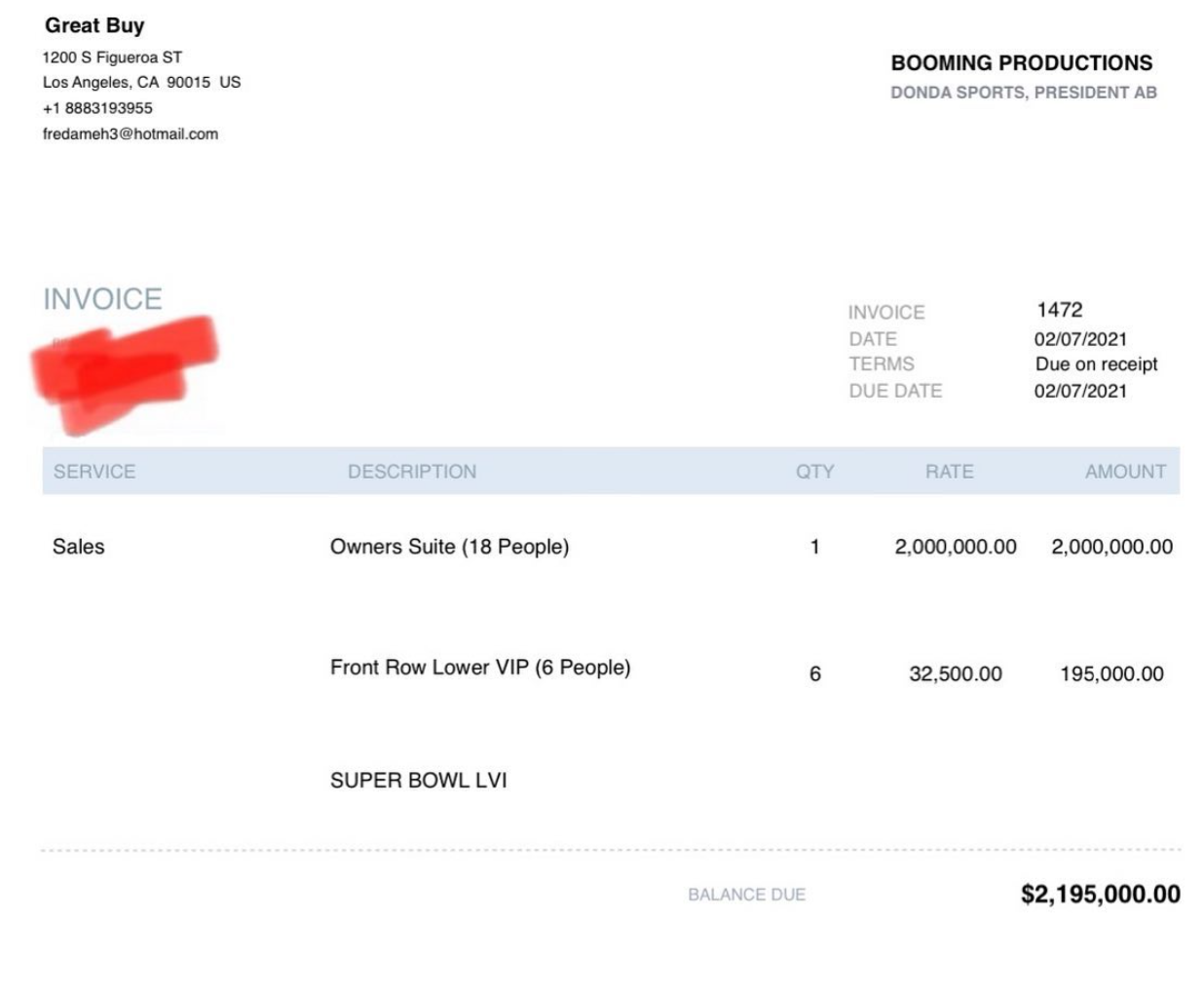 Last week, AB announced he joined Kanye West’s Donda Sports. Yesterday he took to Instagram to announce the paperwork is in place and Brown is officially the President of Donda Sports.

His first move as president? Book a Super Bowl suite for $2+ million dollars for 24 people. Great fiscal move, president. Nice to see you handle your business career with the same acumen as you handled your playing career.

Sadder still is that Antonio Brown posted what is clearly a fake receipt on Instagram to get clout.

While the first several idiots “congratulate” AB on doing “big things,” scroll a little further and it becomes obvious (if it wasn’t by a quick glance of the receipt) to those commenters who actually have experience in business, the receipt has definitely been made by AB himself.

I’ve worked with some huge dickheads in the world of marketing. Tiny peen guys. And in 20+ years I have never seen anyone refer to themselves as “President PE” or any variant with their initials.

Possible Point Four: The address for “Great Buy” the company that generated the invoice is listed as via Google luxury apartments. They all look to be residential though I didn’t look that hard. It is possible someone is running a business out of an apartment. But it is probable this is a fake company.

Point Five: A Hotmail email address as your primary contact – in 2022?!

I get the hype/earned media (like this very piece you are reading) acquired as a result of bringing AB onto the brand right now, while he is hot as his career flames out and he nukes everything he touches.

But if Antonio Brown is actually the president of anything other than his own fan club, it can only be a loss leader.

“WE THE OWNERS NOW !

Donda is about ownership, empowerment, and discovering the next superheroes. This is for the people who counted us out, for everyone who said we can’t— we say WE WILL

As President, it was important to me to book the Donda Suite for this years SUPERBOWL LVI. This is a game meant to be watched together. This is the love and unity we need to push. THIS IS FOR THE KIDS, OUR NEXT GENERATION!!!

We will be hosting community events this weekend, and inviting kids with their families to the game, let’s give people the Donda Experience

As one commenter posted out, this is a terrible financial move for any company, or for personal liability:

“help me understand… you are worth 20 million (google search)… you spend 10 percent on one event. Why not invest that into an account paying 6-12 percent? Come on my guy make good financial decisions so ya kids, kids can live good.”

Of course, he was immediately labeled a “hater.” Nobody is pooping on the AB parade, buddy!

Other Faves: So you bought this last year my man? You’re being played AB😂😂

Waste of money. Go feed some homeless families with that money. Paying just to be seen

This is consumerism, not ownership

Sound financial decision just like everything else you’ve done 😂

This is boss shit? Bruh the actually owner just made 2.1M off you for a one night event and that’s boss howwwww? The flex I mean that’s cool but buy sofi stadium boss

Needless to say, AP should stay out of AP (accounts payable, dorko).