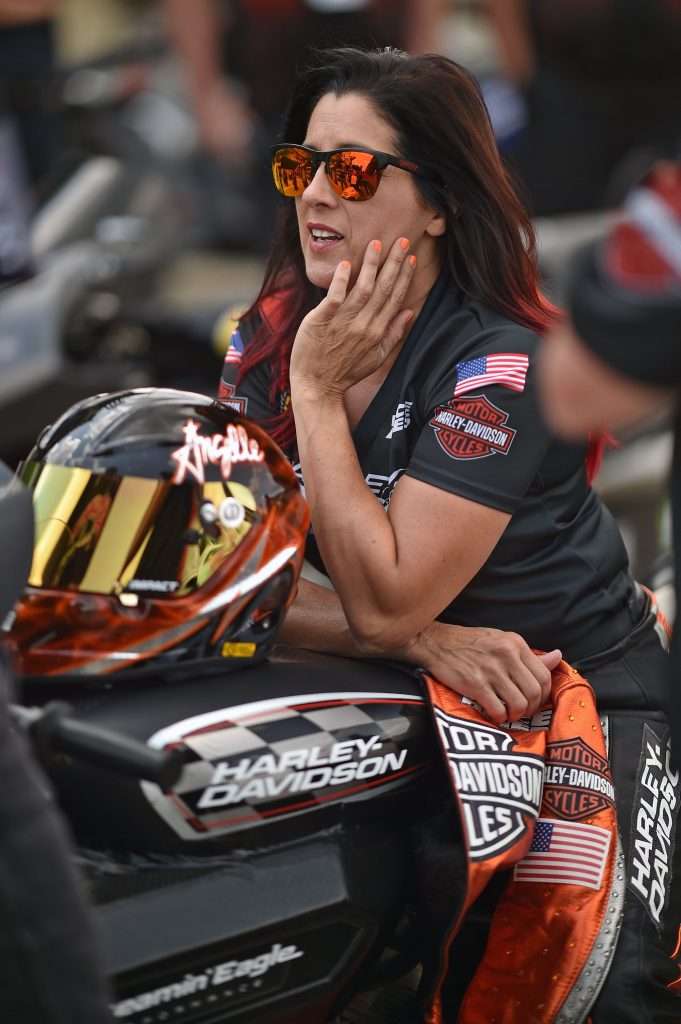 Since her debut in 1996, she has earned 45 top-qualifier awards and 42 event victories, the most wins for any female in both NHRA competition and professional motor sports as a whole.

In addition to being the winningest female in professional motorsports history, she’s also a registered nurse, wife, and mom to an eight-year-old daughter. And, she’s been called “smoking” hot by thirsty NHRA dudes everywhere.

She is currently drag racing with the Vance & Hines Harley-Davidson team and wants you to learn to ride. Visit this link to find an HD training academy near you.

Question and Answer with Angelle Sampey

I-80: One of your early sponsors was Winston, the cigarette brand. When was the last time you just fired up a heater and sucked down a Winston at the track?

Angelle Sampey: Hahahaha! I’ve never been a smoker and Winston never required it of me. Does it count if I’ve been smoking tires? It wasn’t a requirement to smoke, and as a matter of fact what we’d tell people was, “I’m not suggesting that you smoke, but if you do, I’d prefer if it was a Winston.” I’ve never taken a cigarette to my mouth and I’m happy to say I’ve always stayed healthy.

Oh man, I’m not a smoker either. But I have definitely smoked at the track a few hundred times. And it’s just the best feeling ever. I can’t explain it.

For me, burning that tire gives me that same feeling.

Q: How many seconds does your average run last?

Q: So you were just 1 MPH below your goal?

That makes it worse! Any other metric in life, you could just round up to the next whole number.

Just a little tiny bit of tailwind at that speed would’ve pushed us over 200.

As you accelerate to 100 MPH in the first two seconds, what is the first part of your body you feel that speed in?

Definitely in your core, your abs. And that is what I work out the most in the gym. You’re kind of leaning forward, and when you go, everything is pushing against you.

There are so many little things I have to be focused on, and I don’t know if it is just the adrenaline rush or what, but it feels like I haven’t had a breath in several minutes and my heart is pounding. On the starting line it is actually very, very calm. Everything is completely quiet and if I am breathing, it is very shallow and slow.

Some people have accused me of being very shallow and slow. And they might be right, IDK. So when you’re at the starting line going 200 MPH in under six seconds, I’m gonna give you that extra .24, is that even enough time to blink?

Actually, have you ever been in a car accident? It’s like your brain slows things down to almost think for you.

Yes, I was married once for 10 years. Know exactly what you mean. It was a slow moving accident.

Well somehow your brain is so miraculous, it literally slows things down for you. And I’ve thought of things I never thought I would think of during a run.

So you’ve spent a lot of time at the track during your 20+ year career. A very masculine place all in all. And you’ve an attractive woman. What’s the worst pickup line you’ve ever heard?

Oh man, there have been some nasty things said to me. I can’t really remember any right now, but pretty much your basic, “Hey – you are hot!” That one was pretty common.

When I first started, there were very few women in motorsports. Shirley Muldowney was one of the best and most well-known in the sport. I was one of the first women in my motorcycle class, which is considered the most manly, masculine of all the classes. They don’t want to get beat by some itty-bitty girl. I weight about 118 lbs – who wants to get beat by that?

On your Facebook page, your profile picture is you exposing your midriff and you look great, you look hot. How to you balance being a successful racer with sex appeal and utilize both?

I’m glad you asked that. Because at the very beginning of my career I tried to hide my body.  I didn’t want them to see me as a weak female — I wanted them to see me as a strong person. My husband is the one who really pushed me to do the photos that you are taking about. We did a photoshoot.  And then I was kind of scared to show the pictures off. But it is one of the best things I ever did.

I love racing and the competition, but I love just riding as well. Its the best part of my whole life. It is my therapy. And I want to share that with other people.

Harley Davidson is a great place to go to learn to ride. You can go to Harley Davidson.com, click on “Learn to Ride” and check out the riding academy. Whatever skill level you are at. Just get out there and ride.