Wiggins dunk on Luka was so ridiculous they called an offensive foul lol! Steve Kerr wisely challenged and the call was overturned.

Luka Doncic on Andrew Wiggins’ Q4 dunk over him: “That was impressive. I’m not going to lie. I saw the video again, and I was like, ‘Ooof.’ I wish I had those bunnies.”

He’s an idiot. He whines more than a 10-year NBA veteran. After every single possession he turns and looks at the ref, even more than LeBron James.

Warriors’ Andrew Wiggins on his poster dunk over Mavericks’ Luka Doncic: “They tried to take it away!”

Check out these before and after images of Wiggins dunk on Luka: 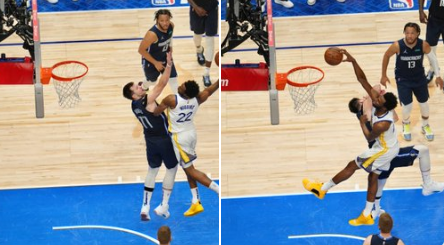 When asked for his immediate thoughts on throwing down a dunk like that, Wiggins replied:

“I was just feeling the energy. That was the main thing. When I seen the rim, that’s all I saw. They tried to take it away from me but Steve challenged it.”

What if Steve Kerr hadn’t challenged it?

“Nothing. I feel like that dunk would still be alive. I was surprised when I saw offensive foul called. I was like, “what the…” They tried to take it away but maybe they didn’t see it full through. That’s what the challenge is for.”

“Just staying locked in, staying aggressive. With every game, every series there is a different challenge. A different opponent. A different team. Not taking nothing for granted. Even how we are up now. The closeout games are the hardest. They aren’t going to go down without a fight.”

“Playoffs are different than regular season. Its way more detailed , more physicality. I love it, I feel like it brings out the most in everyone.”

Where do you rank that dunk on your Nasty List?

“I feel like I’ve got a lot of nice posters. I’ll let you guys decide, I don’t even know.”

Should they allow offensive charges on nasty dunks?

“Nahh! Unless it’s like blatantly obvious. Mine was a little tic-tac; it was nothing.”