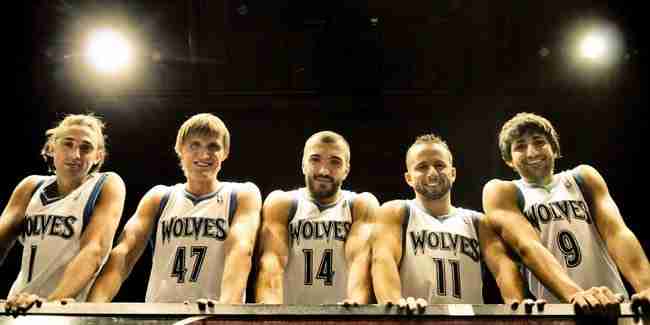 “How can we make all the teams at least somewhat intriguing to everyone, keep this NBA fantasy league competitive and keep ourselves laughing?

What if we only draft white guys?

We all know a guy at the Y — he’s 5’6″, pudgy, bald, slow, hirsute, shoots from behind his head and smells off-putting. Despite all this, he can hit from 22 feet, at will, is deceptively quick and has a funky 12-foot runner that randomly and inexplicably comes in to play when the only business it ought to have is being swatted down his throat.

Observer #1: That guy is terrible.

Basketball has athletic loopholes. Some can spot them, most cannot.

We also know another guy — he plays in the same game. He is 6’6″. He can barely shoot or dribble. He blocks and hacks the Hell out of everyone and, if he catches it, you can hit him for an alley-oop or two, per game.

You can’t tell me that you’re not baffled when J.J. Barea steps on to an NBA court. Basketball has athletic loopholes. Some fall ass-backward in to them, most do not.

In the NBA, these guys exist in certain capacities. Clearly, they are superior athletes, but just as goofy.

How about when awkward-as-Hell Robin Lopez pulls a random post move out of his ass and the ball accidentally rattles through the net?

Hey, that sort of looked like a basketball play!

This season, my friends and I looked at the notion of playing NBA fantasy league and were bored.

NBA Fantasy is, arguably, the best test of knowledge in the fantasy world.

Much like the NBA, the best team nearly always wins throughout the season.

Whereas Ryan Braun may go 2-35 to kill you in a playoff week, or Adrian Peterson might go for 60 yards with no TDs, LeBron James is never going for a 9 pt/3 ast/1 reb/0 blk/0 stl average over a three/four game span.

The only wildcard in NBA fantasy is injuries.

Last season, I front-ran a league throughout … then Dwight Howard decided to quit. My team became a prototypical first round bounce.

And what dork can forget the March 2007 AND 2008 fantasy-depantsings pulled by Dwyane Wade’s shoulder and knee, respectively?

That’s all NBA fantasy basketball is — managing injuries. In nearly every league I have experienced, a team dominates for 50-75% of the season, due to an intelligent manager … who gets fucked by a late injury — some random #4 seed wins and everybody is disappointed.

Nor is Roto — to all of you asshats who will suggest that cheesedick nerdery.

This is Amurrica — we have playoffs. We aren’t the English Premier League.

Roto is a shitty fantasy option because half the league checks out by Week 10. Nobody trades. Nobody talks.

[SIDE NOTE: I am a fan of Roto playoffs in head-to-head leagues, especially in football. Six teams in, three weeks, cumulative points. In my experience, nobody backs in to FF playoffs. Every team that grinds its ass in deserves a chance to play until the end and nobody gives a shit about consolation matchups.

Managers check out after teams lose and there never seems to be any hype for the championship. Even the sixth place team would have an outside chance going in to Week 3.

After a long season of personal investment and fucking with one’s very best friends, I feel like this would make fantasy football playoffs particularly awesome. Catch up to my genius, Yahoo.]

As the few people in my crew who still wanted to play fantasy NBA looked at the 2012-2013 season, the prevailing question became:

How can we play fantasy NBA in a way that is funny, or at least FUN?

No. Too easy to manipulate.

How can we make all the teams at least somewhat intriguing to everyone, keep it competitive and keep ourselves laughing?

What if we only draft white guys?

You can only draft white guys. Every team will get a marquee guy — Love, Dirk, the Gasols, David Lee, Steve Nash; ok, so you could only have like four teams — and then dig around for role players.

Me: I’ll give you Luke Ridnour for Kosta Kufos.

You: Haha. Luke Ridnour and Kosta Kufos. Also, fuck you. I’m not doing that fleece-job.

To be fair, it makes me a little uncomfortable, but the idea is based in humor, not race. The truth is that white NBA players — no matter how you slice them — are funny.

I loved the notion of potential angry message board posts like this:

“YourMomsBalls is a dick — offering me Steve Novak for Ersan Ilyasova is pathetic. Shove your shitty trade deals up your ass. Throw in Greg Stiemsma and maybe we can talk, douche.”

Which brings me to my next point …

White NBA players not only look preposterous, but they also tend to have hilarious names.

Greg Steimsma — the name alone conjures an image of a lumbering Wisconsin hunk of gigantic Wonderbread.

I don’t need to post a picture. Whatever vision that name invokes for you — that’s what he looks like.

Anyway, let’s get to the ground rules — from the invite email:

Every player on every team must be white — save for your second bench spot, which will be reserved for a black guy with a white name (i.e. Wesley Matthews). This player is NEVER allowed to play. He is simply an ornament.

Each of the four teams (seriously, there can only be four — and it’s a stretch) will consist of two guards, two forwards, a center, two utility and the aforementioned two (really one) bench.

Statistical categories include Games Started and Field Goals Attempted, as these are at a premium in the world of white players.

I wanted to make Personal Fouls a positive thing, but Yahoo doesn’t have that function.

Apologies to the ghost of Joe Kleine.

Kevin Love, Dirk Nowitzki and Ricky Rubio will start the season on IR, but should probably still go 1/2/3.

Which brings me to my other point — white foreigners count. But your Steph Curry/Blake Griffin/Klay Thompson?

A vote will be taken on Kris Humphries, who is 75% white. Jeremy Lin is out.

A master list of eligible players for this NBA fantasy league will be provided, pre-draft. It will, of course, be called, The White List.

The commissioner (me) will immediately drop any non-approved players from your team. If you sneak one in to a lineup, you will forfeit that week.

This will be the stupidest — evidenced by the fact that it should be stated as most stupid — NBA fantasy league of all time. 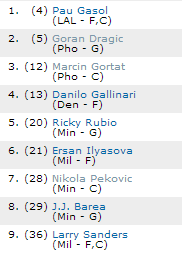 Two of the four NBA fantasy league team managers were inexplicably drafting from the same computer — and I’m still not sure how that works — while  the other two had loaded The White List in to Yahoo’s Pre-Draft Rankings and, hence, were picking rapid fire.

That moves pretty fast in a four-team league — especially when drafting from the same computer as another guy, with 90 seconds on the clock and nothing but a printout of random, generally unrecognizable names.

That aside, my team — first SuburbanDateRapists, then David Faustino (because of the whitest rap video that was attempting to be non-white, of all-time) — stands in second place … 33 games behind The Small Penises, who really cleaned up late with Ersan Ilyasova and Nikola Pekovic.

Such is the Old Zealand All-Whites.

Judge it if you want, but we have made NBA Fantasy league fun again. Maybe it’s racist, but that is certainly not the intent.

I leave you with a true original — The White List email:

I have compiled The White List, in all its glory. It includes 84 candy-faced goons — 20.1 % of the NBA. With only four teams, I think I am going to expand the rosters. I want us digging deep in to the alabaster crevasses of the league. Thinking about eight per team, plus the white-name black guy who can never play. That means 32 will be on rosters and 52 on the wire — digging through which is going to be hilarious. Notable statistics from the fact-finding mission include:
— LAC & Memphis will be attempting to win without any white players this season … and I can’t believe there are just two. This is going to work out.