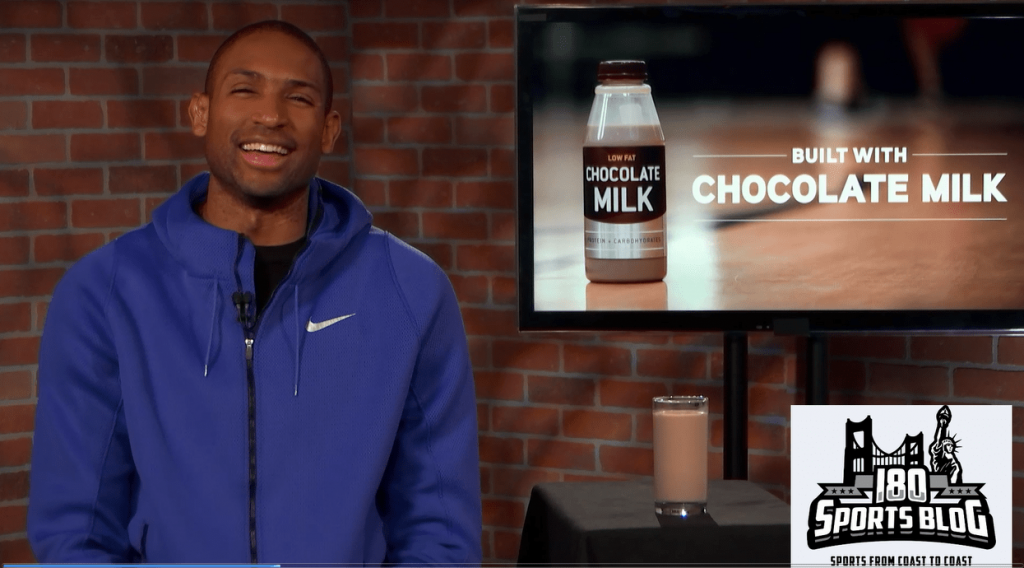 Al Horford loves chocolate milk and he wants you to jam as much into your body as you can physically handle.

As the latest chocolate milk pitch man, he has a responsibility to load you with as many electrolytes as he can.

We briefly talked milk and then got into questions about his career, regular guy stuff, then played word association while John Tesh’s “NBA on NBC” theme played lightly in the background.  Watch the video or read below:

Question and Answer with Al Horford

Question: The average human body is 75% water. What percent of your body is chocolate milk right now?

Answer: That’s a great question. Chocolate milk is great for my recovery. That’s when I drink it, it has everything that I need to help me recover with the carbs and the protein. I would say I’m about give to ten percent right now, as much as I’ve been drinking it.

Q: I want to get into your career a little bit. Starting with your time at the University of Florida when you guys were back to back national champions. Do you still talk with the guys from that team? Joakim Noah, Corey Brewer, David Lee.

A: Yes, there’s nothing like those college years for relationships and friendships. We still stay in touch. I was recently with Joakim. We’re not as tight as we were in college when we were together every second.

Q: Do you guys have a group chat going were you share memes with each other, like regular guys?

A: We actually do! It’s funny that you say that.

Q:Who drops the most fire memes? Is it you?

A: Uh, no not me. It’s probably Taurean Green. He’s the funny one.

Q: What’s it like being in the throes of everything?

A: It’s unbelievable man. Its amazing how these deals, how everything keeps coming together and keeps happening. And it also shows the amount f talent that is in the NBA. The league just continues to get better and better. it is as competitive as its ever been since I’ve been in the NBA and this is my 12th year.

Q: At some point in your career, did you just get immune to people watching you?

A: That’s a really good question. Since I played in college on a lot of big stages; Final Fours, SEC tournaments with a large number of people, I feel like in my college years I really got immune to having people around me. At this point I just go out there and play, I don’t worry about the crowds and the surroundings.

Q: You talked about immunity there, but immunity doesn’t come when you’re at the free throw line. A lot of guys struggle there. What is going through your mind when you step to the stripe and knock a couple down?

A: You always try to focused. But you’re right about that there. When you’re on the road you’ve got a lot of noise, a lot of distractions. The whole thing is that you are in control in that moment. That’s the cool thing about the free throw line; nobody’s gonna run in and block your shot or do certain things. It’s kind of like your time. My focus is on my routine at the line, what I do. The dribbles, looking at the rim, and just shooting the free throw.

Q: I love your overall game. And one of the things you’ve add in your career is the ability to hit the three. Prior to 2014 you averaged .5 three-point attempts per game. Then since then, you’ve averaged about three per game. How did you expand your game and what led to your ability to knock down the three?

A: That’s a really good question. After my third or fourth year in the league, one of my former GMs, Rick Sund, told me in Atlanta, “Hey, you should start shooting corner threes. You have a good shot and it will help extend your career.” He said it and I wasn’t really too serious about it, too committed. But then when Mike Budenholzer and Danny Ferry came to Atlanta they told me straight up they wanted me to shoot threes. So I started working on it. And probably the best thing for me was that coach Bud really encouraged me to shoot them. He didn’t care that I missed, there was no pressure. He gave me the freedom to shoot it. And I think that helped me tremendously, growing and feeling confident.

Q: Real life regular guy question Al. Do you own Amazon Alexa or Google Home and if so, what was the last question you asked her?

Q: You’re missing out Al. Everything from your daily horoscope to a basic math question is right at your fingertips.

Q: Alright Al, we’re gonna throw a coupe words at you, just basic word association. I want to know the first thing that pops into your head. You ready?