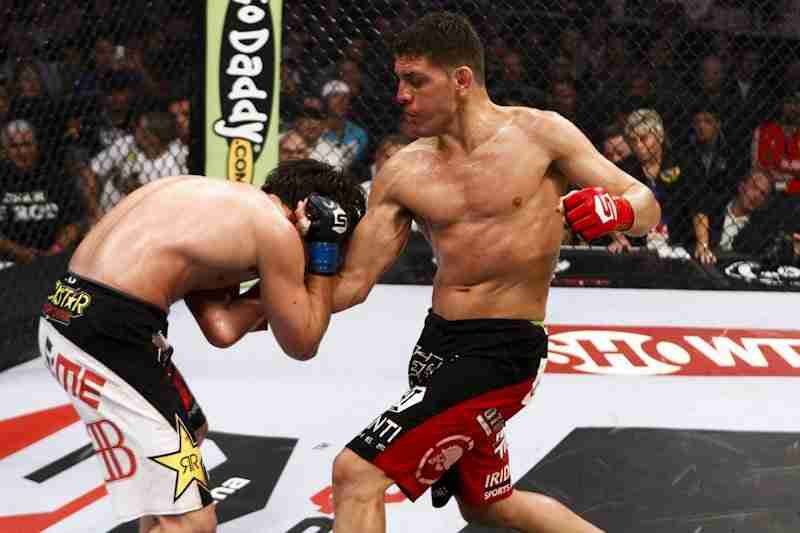 If you hate Nick Diaz, you’ve already got your mind made up and won’t be convinced otherwise.

The people that love him, do so with ferocity- the average Nick Diaz fan doesn’t care about any other fighter. The people that hate him (like the 40 year old soccer mom in Lodi, CA last week that called him a “son of a bitch” at a stop sign), are completely engulfed with disdain and think he is a detriment to the sport.

You don’t have to love the guy, but what’s with the hate? If you’re an MMA fan, you should be a Nick Diaz fan- temporarily. Here are five reasons why:

1) He puts on great fights

Google “Diaz vs. Daley” or “Diaz vs. Lawler” right now for all the proof you need. Even Diaz vs. Mike Aina is great. If his fights weren’t entertaining , he wouldn’t have been brought back to the UFC a second time- The UFC wouldn’t put up with him no-showing at press conferences if no one wanted to watch him. In 35 career fights, he’s gone 26-8. In those eight losses, he’s lost six decisions and two by TKO (KJ Noons, Jeremy Jackson)- he has never been submitted.  What tells you everything you need to know about Diaz is that he avenged both TKO losses in the ensuing rematches and actually beat Jackson in their third fight as well. Even his losses are entertaining, particularly losses to Karo Parisian and Diego Sanchez via decisions.

Diaz fought in his first pro fight at 18 years of age and debuted in the UFC at 20.  After three straight  losses in the UFC, his contract was terminated and it seemed his time in the UFC was over. After one fight in another organization, Diaz was called by the UFC replace an injured Thiago Alves. Diaz won that bout and another, then abruptly left the UFC to to fight in a Gracie promotion that never materialized. But Diaz fought all the way back from being completely written off, to current #1 contender by fighting in and winning promotions EliteFC, Strikeforce and Dream.  He has never backed down from a fight and has taken on some of the biggest names in the sport.

3) He’s arguably the greatest welterweight ever

Diaz has won the belt in every promotion he’s taken part in- Strikeforce, WEC, IFC  with the lone exception being the UFC, something he could rectify on March 16th versus Georges St. Pierre. His lone appearance in Pride Fighting Championships he beat then lightweight champ Takanori Gomi in a non-title bout, but was later stripped of the victory for testing positive for marijuana in his system. Diaz has beaten everyone put in front of him- Frank Shamrock, BJ Penn, Chris Lytle, KJ Noons, Josh Neer, Gleison Tibau, Gomi, Robbie Lawler, Scott Smith. He’s a legend right now but unfortunately, that won’t be recognized until after his career is over.

4) He’s the most complete fighter in MMA

However you want it, Diaz gives it to you. Of his 26 victories he’s won 13 by KO, eight by submission and 5 by decision. He’s as comfortable on the ground defending from the guard as he is exchanging knees in the clinch. You want a high kick to the dome with no warning? How about an inside knee against the cage? Diaz’s stand-up skills are among the best in MMA. He doesn’t get the credit he deserves for how hard he punches with both hands. Look at Mike Aina’s face after their scrap. Or, ask Frank Shamrock. Beyond that, when was the last time you saw him get laid out?  He uses angles on defense as well as he uses them for an advantage on offense.

Diaz is reaching the pinnacle of his skills, and the sport, after 12 years as a professional. How many fighters last more than one or two fights in any big promotion, let alone the UFC? Diaz has outlasted many of his contemporaries the way he outlasts individual opponents inside the ring. Have you ever seen him winded? Come into a fight out of shape? Look over-matched? It never happens because all he does is fight. You hear a lot of fighters say that, but his life revolves around his training and diet. That’s why you never hear of him getting hurt. He constantly maintains and trains his body.