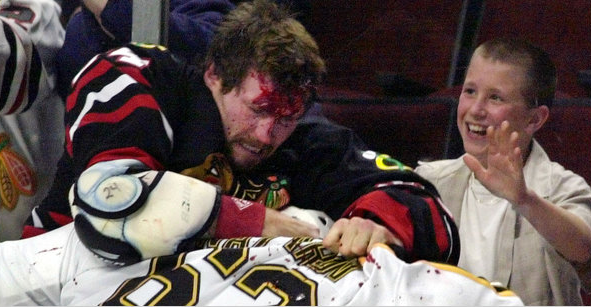 As we sift through the chapters of NHL history, trying to compile a list of the league’s top 5 NHL enforcers, the criteria has to be exact.

The history of the National Hockey League has consisted of a rare combination of epic beauty and sheer brutality that fans have loved for well over a century.

The Shane Churla’s and the Wayne Van Dorp’s of the world would not merit consideration due to the lack production other than the brutalized opponents that lay in their wake. A professional level of skill would have to accompany the violent dominance executed by these “Enforcers” in NHL barns across North America.

Their path would not only leave a bloody trail across the hockey landscape, it would leave clutch goals, all-star games and championships along with the elite destructive skills that produced some of the most memorable moments in the history of the sport.

Here are the top 5 NHL enforcers of all-time:

Before McSorley delivered a fiendish blow to the head of  resident Vancouver Canucks goon, Donald Brashear, he was a valued teammate of Wayne Gretzky during their years together for the Edmonton Oilers and Los Angeles Kings, where he served as not only protection for the game’s greatest player but served as a valued contributor to back to back Stanley Cup victories in 86′-87′ and 87′-88′ in Edmonton.

While compiling 359 points and 3381 penalty minutes in 19 seasons, the burly defenseman not only battered opponents with his fists but with his skill as well, leading the league in plus/minus in 1009-1991, earning an appearance in the All-Star game that season.

By far the most prolific scorer on this list, Hunter amassed 1020 points to go with 3565 penalty minutes in a 20 year career filled with big goals and even bigger hits. Dale’s mean streak reached its apex during game six of the 1993 Patrick Division semi-final vs the New York Islanders. With the Islanders up 4-1, Pierre Turgeon steals the puck from Hunter and scores the series clinching goal. Hunter then absolutely destroys a celebrating Turgeon, separating his shoulder in the process. A donnybrook ensued, leaving the Nassau Veterans Memorial Coliseum ice littered with human debris. Hunter received 21 game suspension for the cheap shot.

Despite his legacy as a controversial player, Hunter has had the distinction of playing in all-star games and has captained a team to the Stanley Cup finals. Hunter’s sweater number (#32) was retired by the Capitals in 2000.

The epitome of intimidation, Domi was one of the most feared fighters of all time. Domi popularized the “championship belt” celebration long before it became a marketing tool after castigating another helpless opponent. Domi had a rivalry with fellow strongman Bob Probert that would be as epic as any that had preceded it or that would follow in its devastating wake. During the span of nine grueling fights, the “belt” changed hands several times with the eventual victor of the series up solely to ones own opinion.

As a young man, I witnessed the shattering of Chicago Blackhawk defenseman Steve Smith’s leg with the sheer force of a Domi blow at the old Chicago Stadium. The collective 17,317 in attendance were sickened by the display and as a result, I’ve been in fear of the man ever since.

The undisputed heavyweight of his generation, Probert destroyed opponents at will while playing a solid two-way game that produced 163 goals and 3300 penalty minutes. For 16 seasons and 246 fights Probert imposed his will on opponents and although he amassed 384 points that included seasons of 29, 20 and 19 goals for the Detroit Red Wings and the Chicago Blackhawks , he was known for his fighting prowess above all else and his YouTube fight reels are true gems.

A recent Hockey News poll named Probert,”the greatest enforcer in hockey history” and few would argue that summation. The aggression Probert displayed on the ice paled in comparison to the reckless lifestyle he lived. Probert partied to the point that he served 90 days in prison and was suspended for the entire 1994-95 season after a slew of drug related offenses.

Probert did not leave his lust for fisticuffs at the rink according to a rap sheet littered with bar brawls and assaults on officers of the law. Though flawed, Probert had a giving soul. He was active in his support of  young hockey players in the community and often bought tickets for kids who couldn’t afford to go to games. While boating on July 5, 2010, Probert collapsed and died of heart failure. He was 45. Hockey fans will never the indelible mark he left on the game. RIP.

Tiger Williams is a throwback to a more violent era of hockey and has been a party to some of hockey’s wildest and most brutal brawls. From splitting open the head of Buffalo Sabers Coach Scotty Bowman to smashing his stick over the head of an opponent, Williams’ value to a team was notoriously measured in victims, not statistics.

The instigator of bench-clearing brawls and mayhem across the league, Williams once went into the  seats at the Montreal Forum and attacked a fan who had thrown ice at him.There isn’t enough space to list all of Tiger’s greatest hits. Besides, some are too intense for the squeamish. Lots of them have been delivered in stick-swinging situations. Despite the fact that Tiger’s name is associated with violence in hockey, truth of the matter is he is one of the most entertaining and liked hockey players of all time.

He wasn’t counted on as heavily for offense but still scored at a respectable clip. In 1982 Tiger was a huge part of the Vancouver Canucks run to the Stanley Cup finals.

In total he scored 241 goals and 272 assists for 513 points in 963 games. Tiger scored a career high of 35 goals and 62 points while amassing a league leading 343 penalty minutes in 77 games during the 80-81 campaign. Those are numbers that suggest that he was much more than just a goon.