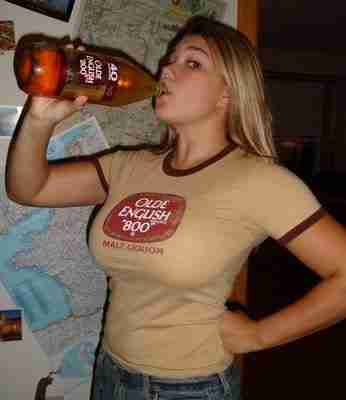 It’s been a long, hard day.  You’ve just gotten off of work and you want to kick back and catch a nice buzz. Unfortunately, there isn’t a lot of currency at your disposal.  Just like a salmon with the natural instinct to swim upstream and propagate the species, you have the natural instinct to drive up the street to the liquor store and wrap your lips around that tall, frosty 4-0.

Ah yes, the 40 ounce.  Men throughout the ages have sung praise to this heavenly creation, passed on to us by the Gods.  For just around two dollars (less or more depending on your tolerance for shitty tasting beer), you can get your drink on and also feel like a pimp whilst holding this challis of mediocre social standing.

The 40 isn’t intended to impress people or chicks; it’s there to get you nice and toasty.  Depending on the beer you like and/or the money at your disposal, there are social class breakdowns within the context of the 40.

If you happen to be a middle-aged, white, businessman, chances are you’re going to reach for a higher end 40; aged 2 weeks from a mid-region of Missouri known as St. Louis; Bud Light will suit you.  Bud Light is affordable (2.49) and represents the pinnacle of social standing in reference to the 40 ounce.  All of your rich friends who wear turtlenecks won’t bat an eye when you pull out the Bud Light.

If you made the mistake of purchasing Colt .45, those same friends will scatter faster than midgets during a flash flood.  Colt .45 is on the low end for cost (1.49), but on the high end for a “How did I get my lips around the exhaust pipe of the car?” good time.

If you happen to be a student at UNO, then you know trying to find a parking space on campus is like trying to hide a boner while wearing a speed-o; it just isn’t going to happen.  Fortunately, you don’t have to look far for value when choosing a substance to abuse.  Behold, the Natural Ice 40.  At just 1.59, it’s almost a full dollar cheaper than Bud Light and it contains more alcohol.  It’s the perfect way to say goodbye to meeting deadlines and remembering things, and hello to procrastination and yet another year of higher education.

Lets say you are a construction worker.  Your trailer caught fire last night when, during “WWF Thursday Night Smackdown”, a heated debate about quantum mechanics in relation to the uncertainty principle, got the best of your emotions.

The trashcan in the middle of your trailer that doubled as a heater/stove, was spilled over and engulfed your trailer in flames.  To make a long story short, your trailer burnt down, and you lost the argument. (You confused the uncertainty principle with quantum fluctuations.)

Now, you’re thirsty and need a place to live.  This is where Magnum steps in as the voice of reason.  At just 1.19, how can you not hear the logic?  It’s filled with as much liquor as Colt .45 and the empty bottle, being about the same size as a standard trailer home, will be the perfect storage space for your collection of Jeff Gordon NASCAR paraphernalia.

So, now you are saying, “Paul, all these 40’s sound good, but isn’t there one that stands above the rest?  The answer is yes.  Supremacy comes in the form of a gold and red label; Olde English 800.

What does the 800 stand for, you ask?  The average bail amount for anyone who drinks more than two of these in one sitting.  If it weren’t for Olde E, the 40-ounce would’ve never been brought to the forefront of the American consciousness. At $2.29, it’s not the cheapest or most alcoholic 40, but it’s a name you can trust.

What’s in a brand name?  Well, I don’t know either, but who was you favorite Cameron: Poster boy Kirk in Growing Pains, or Candice in Full House?  I’d have to give Candice the edge, but one thing is for sure; Uncle Joey needed to get his ass kicked.

I don’t know exactly what Full House and Olde English have in common, but I do know that we should all, as a people, crack open a 40 and spread the love.  Unless it’s a 40 oz. of Camo (1.19), then get the hell away from me.  If it isn’t, pour some out for the homeys and pass it to the left.