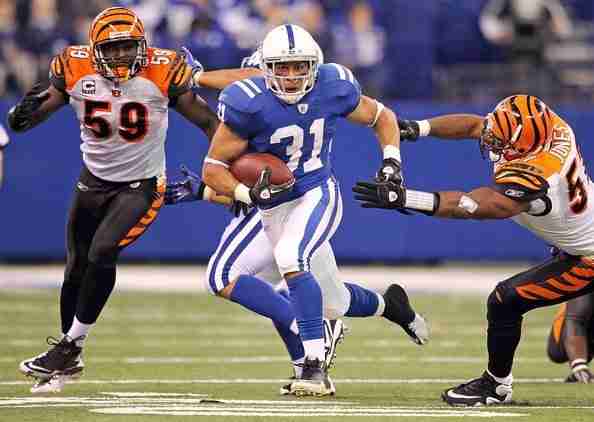 Pssst! Want to know a secret with less than 72 hours before the NFL Draft? Donald Brown is the best running back available.

Chris Wells and Knowshon Moreno, who have thus far been pegged as the two “can’t miss” RB’s in this draft and are considered by most to be #1 and #2 running backs available, benefit from coming out of two of the “power conferences”. But hasn’t history indicated time and time again that this is at the very least a false assumption?

The running back position, especially in terms of the NFL Draft is a fickle mistress. For every first rounder like Adrian Peterson, there are five Kijana Carters, Curtis Enis’, Rashaan Salaam’s, Lawrence Phillips’ or “insert your favorite teams notable draft bust RB here” who also came from “power conferences.”

But somewhere on the eastern seaboard, Donald Brown sits and doesn’t read too much into anything he hears.

“Its pretty much all hearsay right now just like it has been since the beginning,” said Brown about his potential draft stock.  “So much can change from now to the draft; if a team who needs an RB makes a trade right now everything changes. So it’s just a lot of hearsay until it actually happens.”

Brown is a player who excels in all aspects of the running back position and doesn’t have a singular weakness the way Wells (isn’t durable enough) or Moreno (isn’t strong enough) do. The critics say Brown lacks the break away speed necessary for a starting NFL back but he ran a faster time in the 40 (4.51) than did Wells (4.59) or Moreno (4.62) at the NFL Combine.

“It’s just a matter of relaxing and going out there and running,” said Brown about running the 40-yard dash at the pressure cooker that is the NFL Combine. “You run the 40 so many times, you just try to go out there, have fun, and remember why you are there. A lot of this stuff doesn’t matter. It doesn’t matter how fast you can run 40 yards in a straight line. That’s irrelevant; you never see that in a game.”

So now that that’s out of the way as a plausible reason for why Brown isn’t getting the respect he deserves, what else can it be? How about the level of competition.

Brown, playing in the Big East conference as a junior, led the entire NCAA in rushing yards in 2008 averaging over 160 yards per game for a total of 2,083 yards while scoring 18 TD’s.

The sad thing about Brown’s case, or the NCAA in general, is that if a player doesn’t come from one of the big name conferences, their accomplishments are seen as invalid or less credible at the very least.  But Brown has flown under the radar for so long he isn’t about to start worrying about it now.

Brown’s low key demeanor and “take it as it comes attitude” explains his transition from a back-up to stud in his third year. In his first two years at UConn, he split time with other RB’s, but Brown averaged almost 860 yards, 5.2 yards a carry per year and scored 17 total TD’s. In 2008 when a preseason injury to back field mate Andre Dixon meant Brown would be carrying the load himself, he responded. Brown took double the amount of carries in 2008 as he did in 2007 and his ypc averaged actually increased by almost a full yard.

“The success I had this season was due to all the work I put in the weight room, and just being able to produce when I was asked to was an extension of all that preparation and the fact I had a great offensive line in front of me,” said Brown. “The most enjoyment I get doesn’t come from all of that, or leading the country in rushing. It comes from winning; it’s the most enjoyment I get and the reason we all play this game.”

Sure that’s the prototypical answer given by any potential first round pick in the days leading up to the draft, but the difference is that when Brown says it you believe it. You get the feeling that he is a great example of a guy who worked hard, even when it didn’t seem like it would amount to much, but did it anyway and is now reaping the benefits.

“I see the light at the end of the tunnel,” says Brown about the mere hours that remain between him and the Draft. “It seemed like a long way away when I first started preparing for the draft, but here it is. It’s good to take a step back and think about everything but rookie mini-camp which is a week after the draft. But for now I’m satisfied the way everything went.”

Over the last week, Brown has seen his stock rise considerably and may be the fastest riser of all available prospects. From being projected as a possible late round pick at the end of the season, he is now viewed as at least a late first round selection.

“It’s funny to just  be relaxing, flip on the TV and see yourself or hear about your draft stock,” said Brown. “I remember watching TV the other day and the ticker popped up at the bottom and it said ‘Going to the Patriots; Donald Brown.’ It made me laugh because it changes every day and it’s funny. You can’t really avoid it either because it’s everywhere you look.”

So what has spurred that transition?

“It’s been a long journey with a lot of hard work, and I just think everything is falling into place right now,” said Brown. “It’s obviously good that they are talking about you in a positive way, but I don’t buy into all the Mock Drafts. It changes every day and if you really follow it you will drive yourself crazy.”

Now though, after literally years and months of preparation and with the Draft closer than ever, it’s finally reached the simplest of stages. “Right now it’s just a waiting process you don’t have anything else to prepare for,” said Brown. “Just watch the draft and wait for your name to be called.”