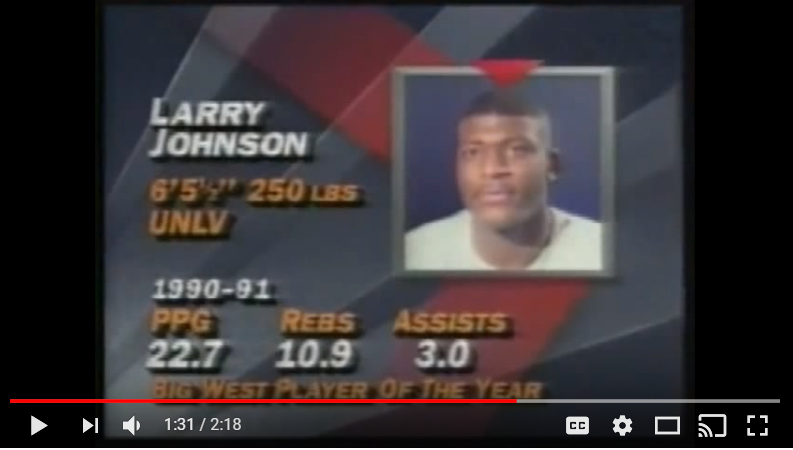 In the days leading up to and following the 1991 NBA Draft, it really all boiled down to Larry Johnson.

The number one pick in the 1991 NBA Draft was arguably the greatest college basketball player of all time. Johnson was coming off a two year college career where he led unheralded UNLV to back to back Final Four Appearances and a national title, winning the Wooden Award once and being named an All American both years.

Once he got to the NBA his game translated immediately because of his body and style of play; even as a rookie he was the strongest, most physical guy on the court averaging 19.2 and 11.0 rpg. His lone gold tooth (before anyone else had one or a “mouf” full) and his middle part (nobody pulled it off like LJ to this day) sealed the deal as either the ultimate villain if you were rooting against him, or your favorite player if you liked the Hornets even slightly.

After his fifth year, LJ hurt his back and was never the same. But, before that he signed the biggest contract in NBA history at the time- 12 years, $84 million dollars which unintentionally impacted the NBA for years to come (perhaps even more than his playing career), even to the present day strike.

If there was a Darko Milicic in this draft it was Billy Owens selected third overall by the Sacramento Kings. In front of him LJ and then Kenny Anderson were drafted, and immediately after were Dikembe Mutombo and Steve Smith.

Owens first five in the years were pretty good, not great, but the trade that sent him to Golden State (after he refused to suit up for the Kings, like a baby) for Mitch Richmond made killed any progression Golden State had made in the previous five seasons by dismantling  “Run TMC”; Tim Hardaway, Mitch Richmond and Chris Mullin.

Seven of the 27 first round selections became All-Stars. There were no MVP’s from this draft class but there were two that won NBA titles; Luc Longley and Bison Dele (Brian Williams) during the Bulls stampede through the league.

Of all the players drafted, no one had a better individual career than Dikembe Mutombo. An 18 year pro, he won Defensive Player of the Year four times, led the league in blocks three times, rebounding twice and was an All Star eight times.