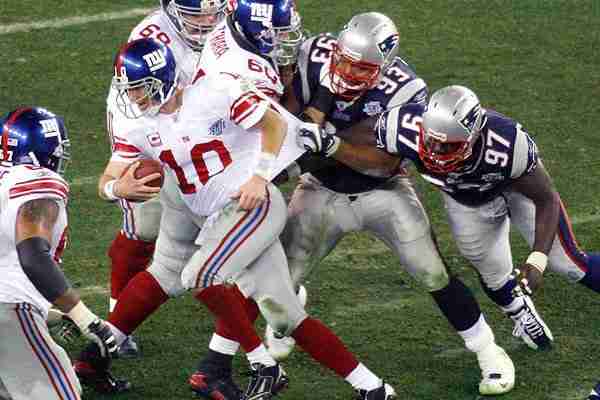 Super Bowl XLII can be summed up in six words; Third and five with 1:15 remaining.

Thanks to superb individual efforts by both Eli Manning and David Tyree the Giants were able to gain 32 yards and convert on the aforementioned third down. What looked to be a game that the Patriots had a firm grip on quickly unraveled and ended with the Giants securing the victory, and the Lombardi Trophy, with a touchdown four plays later.

But what if Eli Manning hadn’t been able to get that pass off? What if Patriots defensive end Jarvis Green could have kept a hold of his jersey and pulled him down for a sack leaving the Giants in fourth and long? Green came within mere inches of changing the outcome of the game entirely, but don’t ask him to lament that fact.

“I was out there and I could’ve made a play. I had my hands around Eli (Manning) but it didn’t happen so that’s the way it was meant to be,” Green told me.

“It hurt because we went out there and made a lot of plays but it just wasn’t enough. The guys that make the bigger plays at the bigger time, that’s what determines the outcome of the game. Eli made a big play avoiding the sack and Tyree made a big play coming down with it”

Though the end of the Patriots 2007 season didn’t end “perfectly” as most people thought it would, their romp through the regular season was something that had to be seen to be believed. For the first half of the season the Patriots averaged over 41 points per game and beat every opponent by at least 21 points.

That eight game stretch not only verified their greatness, but also lent credence to many an undefeated Madden video game season verifying a performance of this magnitude could actually occur in real life.

“Week in week out, it seemed like that,” said Green of the Madden-esque similarities. “If you think about the video games how one team can be so dominant that’s how it was for us this year. But don’t get it wrong; we had stiff competition, especially in the latter part of the year. It wasn’t a cake walk at all.”

As defenses around the league adjusted, the second half of the year proved to be more difficult. Sure they beat the hapless Bills by 46 and the Dolphins by three touchdowns but in four victories over the Colts, Eagles, Ravens and Giants the Patriots won by a combined total of only 13 points.

“We felt dominant at certain points because of how we were winning some games but there were plenty of games where it wasn’t easy especially in the second half,” said Green. “Baltimore, Philadelphia, the Giants in Week 17 all gave us tough games so I mean it never felt like it was easy.”

While the Patriots were having success as a team, Jarvis Green was also having his best all around season in the NFL. A fourth round selection out of LSU in the 2002 draft, Green was known for his ability to pressure the quarterback, ranking fourth on the school’s all-time sacks list accumulating 20 in 39 career starts. Utilized as mostly a backup to starters Ty Warren and Richard Seymour as a Patriot, Green got his most extensive playing time in 2007.

Filling in for All-Pro defensive end Seymour who was injured for most of the season, Green started 10 games accumulating 6.5 sacks, two forced fumbles and a career high 39 tackles. Green had 7.5 sacks the previous year as a spot pass rusher, but was never relied upon as much as he was in 2007.

“With Richard’s injury just being on the field more really helped me produce,” said Green. “Instead of getting in there for a play here and a play there it was easier to get into a groove and play every down, rather than just one here and there.”

Even though he has never been a full time starter, Green has been a steady contributor since entering the league and has had a great deal of success, with three Super Bowls in six seasons. The loss to the Giants was the first time he’d lost a Super Bowl with wins coming in both 2003 and 2004.

“For me it was the first one (2003) in Houston,” said Green when asked which victory was more special. “Just that experience going in and not knowing anything and just experiencing it one day at a time for me. By the time I got to the third one (in ’07), you kind of know what to expect. Not the game itself, but what all goes into it aside from the game. It’s a spectacle in a lot of ways. It’s just the culmination of so much”

Once the 2007 regular season ended the Patriots became the second team in NFL history to complete a regular season undefeated and headed into the playoffs as the odds on favorite to win the Super Bowl.

“Yeah, we talked about it,” said Green about the possibility of going 19-0. “And at the same time, we never thought we’d actually get thru it all that way and then finally get to Arizona. But we kept on playing well and kept finding ways to win.” The Patriots ultimately ran out of ways to win in Arizona, thanks in large part to the play dubbed “David and Eliath” by the New York media.

With the season over and the team falling just one victory short of undoubtedly the greatest season ever, where do they stack up historically? Since the loss, they have faced as much scrutiny about where the 2007 team ranks in the annuals of history as the organization has for “Spygate”.

“Even though we didn’t win the big game that’s an honor in itself,” said Green. “The regular season was great for us. We made history, but at the same time everything we did during the season became a wash because we couldn’t win the biggest game.Just getting that far and going 18-1 is amazing. Where we stack up in history? I don’t really know but that’s not up to me. It seems like you media types are more worried about that than us.”

The media also has a few other questions about the 2008 season and the Patriots in general:

How will the secondary adapt to losing Randall Gay, Asante Samuel and Eugene Wilson in free agency?

“I mean hey, its football. When guys leave we have to find ways to replace them; it’s that simple. That’s three guys we’re losing that were a big part of the team but guys, whether its coaches or players, are constantly moving around so you just adapt.”

Is the rivalry with the Jets as serious on the field as the media makes it to be?

“Yes. It’s an inter-divisional rival and there’s a lot to it so that we never want to lose. But Coach Belichick doesn’t focus any more for that week than any of the other games. He wants you to be focused all the time no matter what.”

Is Bill Belichick the greatest coach of all time considering his success during the Free Agent Era?

He’s a great coach and I’m just thankful for the seasons we’ve had. Right now it looks like that, but he could go the next five years and never win another game. So we don’t know that yet. It’s too early to say until we see the final outcome.”

Why do many people have such a negative perception of Coach Belichick? Is it Jealousy?

“I don’t know man. I don’t know why it’s like that. It’s kind of like the Yankees. When the Yankees are beating everybody I think everybody gets tired of seeing the same people always win.”

After the loss in the Super Bowl how does everyone handle it and bounce back?

“We just have to comeback and get ready for the offseason. Right now there’s not much to talk about. It just comes down to doing it. Plain and simple.”

Thurman Thomas Reflects On Career, Which Defender He Was Afraid Of